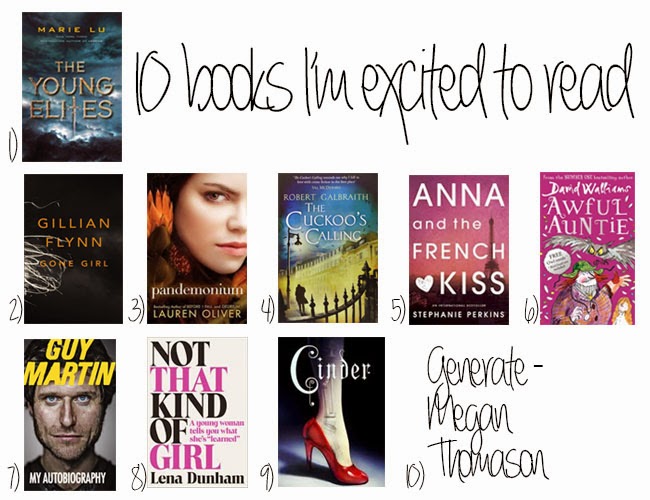 A lot of readers have a ‘to be read list’ and there are some books on there that we want to read more than others.

Here are the top 10 books, in no order – despite the numbers, that I’m looking forward to getting my paws on.

1. The Young Elites – Marie Lu – Goodreads – read November 2014
Ok, I said this was in no particular order but this is the book I am most excited to read.

The Young Elites comes out on Kindle next Monday but the physical copy doesn’t come out until November. The cover is beautiful and I want to hold the book in my hands but if I get the Kindle version I can read it sooner. I’m so torn, help!

I adore the Legend series and the way Lu writes; it’s intense, enthralling and she makes you feel so much.

In June / July I read the sample chapter and it had me hooked. Since then I’ve read and watched a few reviews and it sounds like I’m going to really enjoy The Young Elites.

2. Gone Girl – Gillian Flynn – Goodreads – Read April 2015
The film comes out very soon and I need to read this book before someone (read: The Daily Mail) ruins it for me, or I ruin it for myself by accident like the time I ruined Allegiant by looking at reviews on Amazon. Never do that, not even to gauge how people feel by the star reviews.

People have been telling me to read this for well over a year so I need to get my act together.

3. Pandemonium – Lauren Oliver – Goodreads – read in November 2014
This is the second book in the Delirium series and it’s been sat on my shelf since February. I loved the first book but I didn’t pick up Pandemonium instantly because of the end to Delirium.

The ending was one of those endings were you don’t want to read the next book because it will confirm what happened at the end of the last book and the feels!

4. The Cuckoo’s Calling – Robert Galbraith – Goodreads
Reading Triptych by Karin Slaughter last month has left me wanting to read more crime novels. I heard a lot of good things about J.K Rowling’s first foray into crime novels under the pseudonym Robert Galbraith and I want to put it to the test myself.

5. Anna and the French Kiss – Stephanie Perkins – Goodreads – read 19th October
I know, I know, I’m way behind here. All the raving about the latest book in the series, Isla and the Happily Ever After, has got me excited so I need to start this series soon.

6. Awful Auntie – David Walliams – Goodreads
This is a kids book but it’s not a good kids book if adults can’t enjoy it too.

Last weekend my Mum had a party and there was an eight year old boy there. Naturally I asked him about reading and he couldn’t stop talking about how much he loved David Walliams’ books.

His mum was excited by them too and said she loved them. He promised to bring some of Walliams’ books round for me to read, sweet. I will hold him to that – no cheesecake next time I see him if I don’t receive a pile of books.

7. Guy Martin: My Autobiography – Goodreads
I like a good biography and to me Guy Martin is an awesome dude. I bought my Dad this for his birthday and I’ve been impatiently waiting for him to start and finish it so I can read it.

At this point I’m wondering if it’s rude to read a book before the recipient has. Is it?

8. Not That Kind of Girl – Lena Dunham – Goodreads – read November 2014
I’m not a GIRLS fangirl, I watched a few episodes but wasn’t hooked, but I really like and admire Lena Dunham for her attitude.

She doesn’t care if you think her dress is ugly or you think she’s fat; she’s not going to let your opinion of her affect the way she lives. I think that’s an attitude a lot of people, including myself, wish they had.

9. Cinder – Marissa Meyer – Goodreads – Read January 2015
This is another one of those books that has been on my TBR list for so long and I will occasionally be reminded of it and say ‘I really need to start that series’ and I haven’t got round to it yet.

10. Generate – Megan Thomason
This is the third book in the daynight series. It hasn’t got a release date yet but I really enjoyed the first two books, daynight and arbitrate, so I’m eager to find out where the series goes.

If you haven’t read daynight or arbitrate and like a good ol’ dystopian, I think these are truly some of the best dystopian books I have ever read.

The Glittering Court buddy read with The Lilac Linnet | A winding road of cunning, pretty dresses & romance to freedom