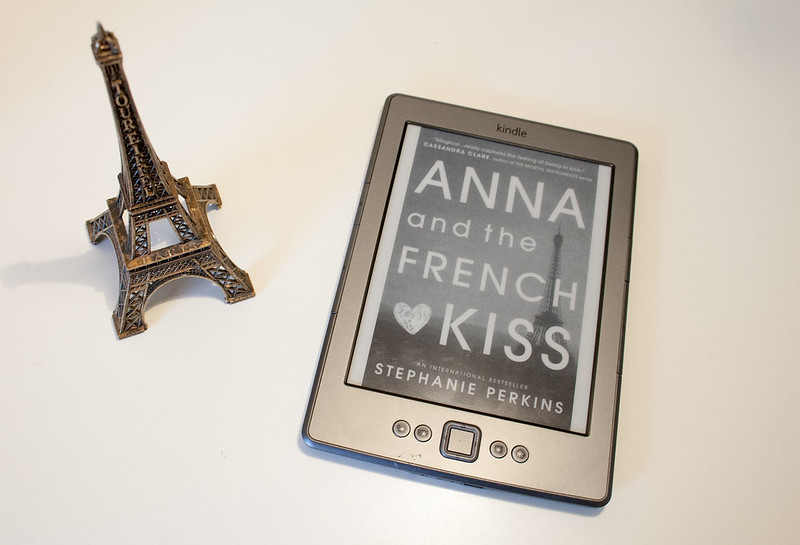 Description from Goodreads: Can Anna find love in the City of Light?
Anna is happy in Atlanta. She has a loyal best friend and a crush on her coworker at the movie theater, who is just starting to return her affection. So she’s less than thrilled when her father decides to send her to a boarding school in Paris for her senior year. But despite not speaking a word of French, Anna meets some cool new people, including the handsome Étienne St. Clair, who quickly becomes her best friend. Unfortunately, he’s taken —and Anna might be, too. Will a year of romantic near misses end with the French kiss she’s waiting for?

I know my blog was quite book heavy last week but I just cannot hold off on this review any longer. It was so good!

That’s right, I have finally read Anna and the French Kiss! You can thank all the bloggers raving about Isla and the Happily Ever After, they got me all excited and I finally picked this up.

Heading into this I was worried that I’d hyped it up too much and that it wouldn’t live up to my lofty expectations. To my surprise though, it surpassed them.

We meet Anna just as she is being dropped off in her dormitory at a school for Americans in Paris by her parents. Understandably she isn’t thrilled about moving away from her friends to Paris and we follow her throughout the year as she makes friends, gets a crush, falls in love and has arguments.

The main characters are undoubtably Anna and Etienne St.Clair, both of which are well-built with an interesting backstory that comes into play rather than it just being about their relationship.

Minor characters such as Mer, Josh and Rashmi are just as interesting and well-developed as our main characters, which isn’t something you see often.

The key thing these characters all have in common is that they are real and you can relate to them and the things that happen in the book. A few things made me relive parts of my life and I’m sure I’m not the only one judging from the glowing reviews of this book.

In terms of the plot, it’s predictable in as much as it’s a romance. When you pick up a romance novel you know that it’s likely the main character will get what they want. The story isn’t about the end goal, it’s about how they get there.

There were a few twists and turns that caught me off guard but there was one thing that I predicted but it didn’t ruin the book for me.

But Perkins goes further than that, she does something incredible. Many authors can make you feel a characters pain, happiness or longing but very few authors can pluck you from yourself and plant you firmly in the head of that character. I was consumed by this book. I was Anna.

I breezed through this book in a few hours on the same day, I just couldn’t put it down. When I had to put the book down, the task at hand was an annoyance. I think I even groaned like a stroppy teenager at the prospect of washing up instead of racing upstairs to finish off this book.

You know that you have finished a new favourite when you reach the last page and you wish there was more. You wish you could continue reading about these two characters for days and days. You wish there were endless sequels. You want to re-read it right away. It also takes you a little while to reintegrate with the rest of the world again.

This is all going very fangirl here. Sorry, not sorry. I’m not the kind of person who fangirls easily so for Perkins to turn me into a blubbering fangirl is a sure sign that she’s onto something here.

This book made me laugh-snort, feel frustrated, smile and gush. It is everything I could want in a contemporary. The only bad thing I can say about this book is that it ended. I WANT MORE!

I’m looking forward to the next book in the series, Lola and the Boy Next Door, I just hope I haven’t set my expectations too high.

In short: A beautifully written, realistic, book that will leave you aching for more.
Price: £5.24 paperback Amazon UK // £1.54 Kindle UK
Would I recommend it? Yes, yes, a million times yes!

Have you read Anna and the French Kiss?

Did I Mention I Need You – Estelle Maskame* | YES! I got my book mojo back.