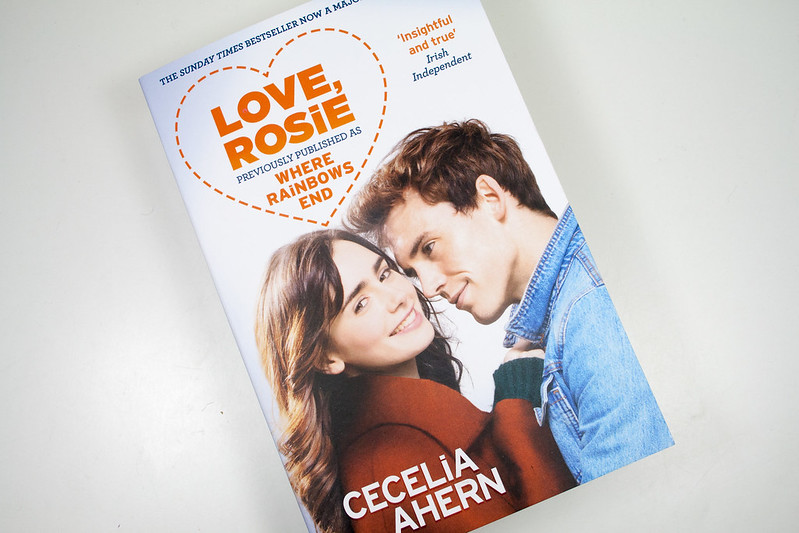 Title: Love, Rosie (Previously published as Where Rainbows End)
Author: Cecilia Ahern
Genre: Romance
Description on Goodreads: Rosie and Alex are destined for one another, and everyone seems to know it but them. Best friends since childhood, their relationship gets closer by the day, until Alex gets the news that his family is leaving Dublin and moving to Boston. At 17, Rosie and Alex have just started to see each other in a more romantic light. Devastated, the two make plans for Rosie to apply to colleges in the U.S.
She gets into Boston University, Alex gets into Harvard, and everything is falling into place, when on the eve of her departure, Rosie gets news that will change their lives forever: She’s pregnant by a boy she’d gone out with while on the rebound from Alex. Her dreams for college, Alex, and a glamorous career dashed, Rosie stays in Dublin to become a single mother, while Alex pursues a medical career and a new love in Boston. But destiny is a funny thing, and in this novel, structured as a series of clever e-mails, letters, notes, and a trail of missed opportunities, Alex and Rosie find out that fate isn’t done with them yet.
Love, Rosie comes out in UK cinemas today so it seems like the perfect time to tell you about the book it’s based on.

I picked this up after seeing the film posters everywhere in Dublin. When I discovered that the book is set in Dublin and that the writer was Irish, I knew it was meant to be.

Love, Rosie is told purely through notes, letters, emails, chats and texts exchanged by the characters. I’d never read a book written like that before but I was hooked from the first page and it worked so well. I don’t think the story would have had such a big impact if it had been told any other way.
There were a couple of occasions where there was a long letter or email which started with ‘Dear Mum’ and it wasn’t immediately obvious whether it was from Rosie or Katie. After two or three paragraphs though you could figure out who it was by what they were talking about.

When you pick up a romance novel you know that in the end, the main character will probably get what they want, you’re just following them on that journey. This journey was fantastic and full of so many unexpected surprises. Just when you thought one thing was going to happen, something else would.

The pages are full of humour, truth, sadness and love as we follow the lives of our two main characters; Rosie and Alex. Oh how your heart will ache at times as you wonder why fate is working against them and you’ll feel their frustration and longing.

This book is highly relatable. I’m not saying you’re going to be able to relate to the entire thing but this book is so real that I’m sure everyone can relate to parts of it. I know I can.
Rosie grows up a huge amount throughout the book and in a completely realistic way. Her life is not perfect, far from it, and things keep knocking her back but she just keeps getting up and getting stronger.

I don’t really know what else I can say to convey that this is a brilliant book other than; read it!

It was one of those all-consuming reads where you forget about everything else around you. The kind where you put down the book and seem a little surprised that there’s a life outside of that book.

I’m interested to see how the film adaptation works because I believe they kept most of it the same but they shortened the time span. I need to find someone to go and watch it with me now.

Also, I really think that Damn You Seventeen off Lady Antebellum’s new album is the perfect song for this book / film. Every time I hear it, I think of this book.

In short: A beautifully written and highly relatable romance.

Would I recommend it? Absolutely, you don’t need to be a lover of romance novels to enjoy this.

Have you read Love, Rosie?

November Roundup & December To Be Read

Magnus Chase and the Sword of Summer | Rick Riordan brings it again!