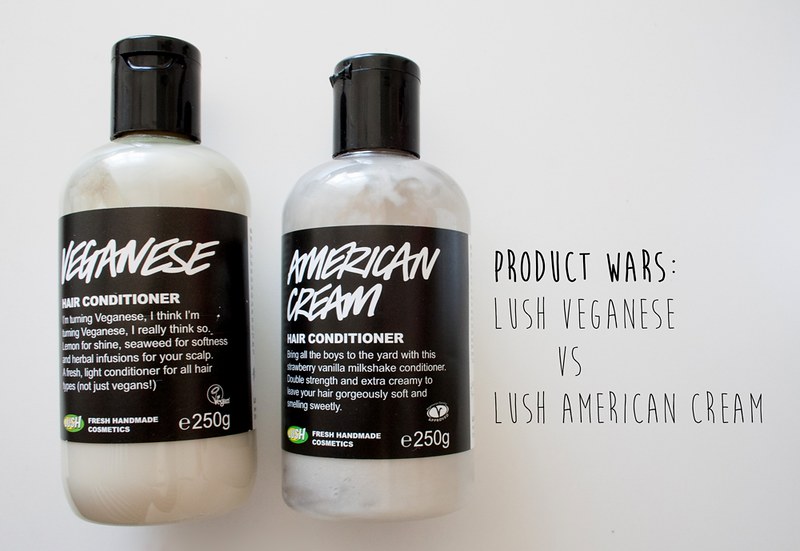 Product Wars is going to be a new series where I pit two similar products against each other to see what worked best for me. A bit of an English essay style “compare and contrast”.

For the first instalment of Product Wars, I’m comparing two LUSH conditioners to each other: Veganese and American Cream.

LUSH say that both of these conditioners are lightweight, and I do agree with that. Neither of them feel like super thick conditioners, but Veganese has a thinner consistency, and a little goes a long way. They both apply easily and neither of them make your hair feel greasy or weighed down.

Both conditioners do a brilliant job of making your hair feel silky smooth, so much so that I couldn’t choose which one is better.

American Cream is supposed to smell of strawberry milkshake, but I’m not really picking up on a strawberry scent. To me, it smells more like vanilla milkshake. The scent seems to last a long time as well, my hair smells nice the day after washing, which isn’t something I’ve experienced with a conditioner before.

The scent of Veganese is harder to describe though. It just smells fresh to me.

I acquired my 250g bottles of both about 4 – 5 months ago, and I’ve been swapping between both and I’ve got about a quarter left in each. So for me, they do last a while and I feel they’re worth it considering how nice they make my hair feel.

Well I suppose this is a slightly disappointing outcome for the first Product Wars, because both of them perform exactly the same. For me, Veganese has the edge though because it is vegan, while American Cream isn’t.

Have you tried either of these conditioners?