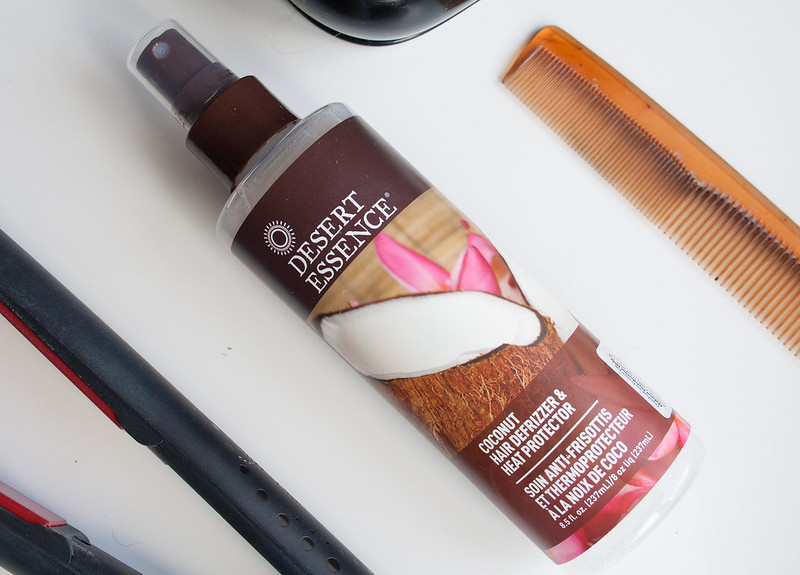 It might be because I don’t buy that many hair products, to be fair. The only products I really use are dry shampoo (which LUSH has covered) and heat defence. I tried to find one on the high street, and it was hard, so I took to the internet, and came across Desert Essence Coconut Defrizzer & Heat Protector.

The reviews are very mixed for it, but I was running out, so I decided to go for it.

Desert Essence say that the blend of coconut oil, and ‘four desert botanicals’ work together to protect and repair damage to your hair, to leave it smooth and healthy.

As a heat protectant, it does what it says on the tin. I’ve not spotted any heat damage from my hair, and it doesn’t leave my hair feeling sticky as other heat protectors have done in the past.

I’ve seen a few reviewers mention that the smell isn’t particularly pleasant, and I can kind of see where they’re coming from.

To be honest, I don’t even notice the smell at all unless I spray lots near my face, which probably isn’t an entirely smart thing to do anyway. The smell doesn’t linger on your hair, so I wouldn’t let reviews about the smell put you off.

As for taming frizz, I have noticed an improvement, especially when I use this when I use this and then use my hairdryer. My hair can get really poofy when I dry my hair, and using this does help reduce the poofiness.

Whether I use straighteners, or a hairdryer, my hair does feel smoother and a little more under control if I use this.

The only downside to this is that it’s a a 237ml bottle, and if I was travelling and only had hand luggage, I wouldn’t be able to take this with me, so I’d need to either try and find a smaller bottle, or decant it into a smaller spray bottle, and I don’t know how ok airport security is with that. Aside from that, I have no complaints.

Update (24th January 2019): I have literally just finished this exact same bottle off. It lasted me almost four years. I’m sure the bottle says use within 12 months but I like to live dangerously, clearly. I really liked this as a heat protectant, it did it’s job. It didn’t reduce frizz as much as I’d like but I think it definitely helped.

What are your go-to hair products?

Trying out Antipodes – are their products worth the hype?