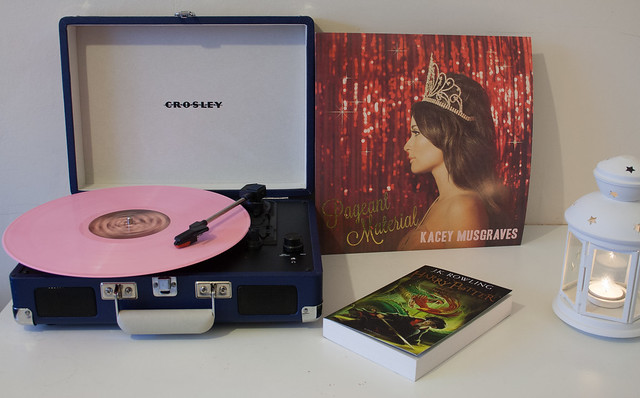 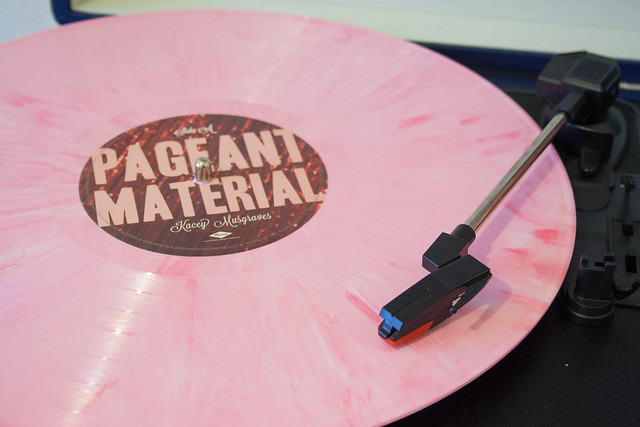 Are there many things better than sitting down to read a book with the crackle of a vinyl record in the background? I don’t think so anyway.

It’s been a while since I’ve done an installment of Vinyl Diaries, so it makes sense for me to talk about the record I’ve been listening to most in the past few weeks; Pageant Material by Kacey Musgraves.

I featured Kacey’s first album, Same Trailer Different Park, earlier in the year and it’s still one of my most played vinyl records alongside Pageant Material.

As soon as Kacey announced Pageant Material, I pre-ordered it on this beautiful pink marble right away. Because it was marbled it came out a few weeks later than the vinyl, but it arrived while I was in Stockholm so it was a nice treat to come back to. (Though I did have to get it from the Post Office and pay import taxes, BOOOO!)

It was well worth the wait and the £13 import tax; just look at how cute that pink marble is. It reminds me of melted pink Maoams or Chewits.

Pageant Material is my go to music for listening to when blogging or reading at the moment. There’s just something about Kacey’s music which is perfect on vinyl. It sounds better on vinyl; it sounds right on vinyl with that ever so slight crackle.

If you’ve never listened to Kacey Musgraves before, you’re missing out. You can’t go wrong with slightly sarcastic (and sometimes very sarcastic) tongue in cheek country. What more do you even want from music?

I could have listed the entire album to be fair because I love every song on it. I can’t wait to see her on her UK tour later this year because I’m still kicking myself for not seeing her when she played last June.

Do you like country music? (If so, we are instant friends!)