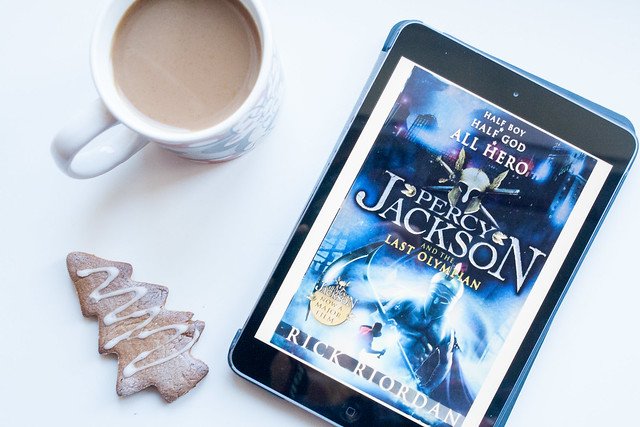 Oft, that was a tiring, adventure-filled, and excellent end to a series.

I put off reading the Percy Jackson series for years because I wasn’t sure whether or not it would live up to all the hype I’ve seen about it, but after finishing the final book in the series, I’m happy to say that it absolutely did.

The Last Olympian is just action after action after action, right from the get go. By the time I finished reading it, I felt in need of a nap and a rest. It just did not let up, and that was a little detrimental at points. Action is good, but it felt like there was a bit too much action. At times it was a little hard to keep up with what was happening, who is who, and I would have liked a bit more slower-paced stuff.

And, bizarrely, the final battle takes place over the course of a handful of paragraphs and seemed a little sudden, which was a little anti-climatic.

That said, I was happy with the ending and I think Rick Riordan did a good job of tying everything up, and he didn’t shy away from killing off some likeable characters.

Percy, Annabeth, and Grover underwent quite a lot of character development throughout the series, and that was evident at the end, especially concerning the decision Percy makes.

One of the reasons I love this series so much is the banter and friendship between the characters, and it felt a little lacking in this book. Though to be fair, they were battling throughout the whole book so maybe the bants wouldn’t be entirely realistic.

All in all, I really enjoyed The Last Olympian and the Percy Jackson series as a whole. I’m clearly older than the target market, but that didn’t make it any less enjoyable, and I actually learned some things about Greek mythology as well, which I can’t complain about.

Percy Jackson has been a really fun, and easy series to read that’s perfect for when you’re feeling a bit burnt out and just want something you can read without thinking about too much.

I’m glad I finally got around to reading this series, and I’m eager to make a start on another one of Rick Riordan’s series. I don’t know where to start though. The Heroes of Olympus seems like the logical choice, but I do really like Norse mythology so Magnus Chase and the Gods of Asgard is looking like the one I’ll go for next.

Have you read the Percy Jackson series?

January Roundup + February To Be Read

Only Ever Yours – Louise O’Neill Review