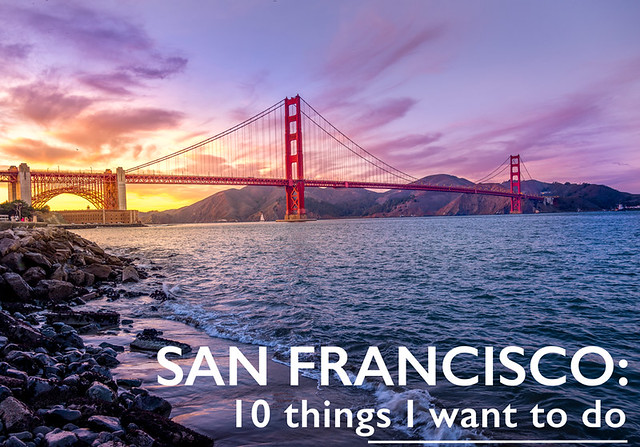 One of my favourite things about an adventure is the planning part. I love falling into hours of research, photos, blog posts, videos, and reviews; it’s kind of my thing. (Maybe I should become a travel agent…)

I have four full days in San Francisco, and I’m taking a day trip to Yosemite on one of those days, which gives me just three days to explore some of the top places to visit in San Francisco.

“Sunset is still my favorite color, and rainbow is second.” #goldengatebridge #sanfrancisco #sunset

Let’s get the obvious one out the way here; when you think of San Francisco, you think of the Golden Gate Bridge in it’s imposing red glory. I’ve seen some absolutely stunning shots of the bridge around sunset and I’m desperate to come home with my own photo like the one above. I MUST DO IT!

See the sea lions at Pier 39

There’s a joke in my family that my Nan’s Labrador, Bert, looks a bit like a Sea Lion; it’s the shape of his snout and his whiskers; it’s very silly. I was scrolling through Pinterest one day when I saw that SF’s Pier 39 is home to over 1,000 sea lions. There’s not a chance I can go to San Francisco and not visit Bert’s Californian cousins. I’ve also told him that I’m going to bring him back a stuffed seal (as in a toy, not a taxidermy seal) to play with and he will never talk to me again if I’m not true to my word. (San Franciscans; tell me I can buy stuffed seals…please?)

Stand amongst the red woods

A few years ago, a friend gave me a tour of his university campus and amongst their mini-forest was a handful of redwoods. I remember him telling me that some of the largest can be seen in SF, and I’ve wanted to see them for myself ever since.

I just love the idea of spending a few hours surrounded by trees that are hundreds of years old and that absolutely dwarf me.

This is going to sound really sad, but one of my favourite parts about going to Alton Towers is wandering through the valley down to the Japanese part of the garden. I know, I know, I’m supposed to tell you my favourite part is riding rollercoasters, but nope, I like pagodas.

I actually found out about San Francisco’s Japanese tea garden while reading Lola and the Boy Next Door (thanks again Stephanie Perkins, my literary tour guide!), rather than TripAdvisor which is where normal people decide where to go, and I’ve wanted to go since reading about it.

what ever happened to predictability?

Nope, I’ve never watched Full House but I really want to see these houses. I’m not hyping them up in my head because they’re just houses at the end of the day, but they’re so beautiful that I just want to see them in person.

I tend to avoid public transport when I’m away, I prefer to explore (and get lost) on foot, but I’ve seen how steep some of the hills are in SF and you just can’t visit SF and not ride a cable car.

This is where the hippie movement started in the 60s, and with such beautiful buildings, street art and record shops, it has everything I want in a place to go. The hardest part about this trip might well be stopping myself buying records because they’re just not going to survive two flights.

Good Morning and hello W e e k e n d?Guess what Time it is.? Nothing better than having a Stack of beloved Blueberry Pancakes plus lots of fresh Berries on Top-yummy!?? ?This super easy, healthy and so delicious Recipe is already up on my Blog. And did you check yesterday Evening’s new Recipe?? So, and again I started my Day with a sunny Run outside and damn it was definitely too hot.??Off to Salzburg doing some Shopping later.?? What are your Plans? Let me know!? And prepare yourself for aother new Blogpost tonight.? Xoxo #breakfast #pancakes #pancakeday #food #weekend

Mega tourist alert moment. I love the Hard Rock Cafe and collect t-shirts, so I definitely need to add a San Francisco one to my collection. Plus, I’m fairly certain my Mother will never let me back in her house if I don’t take her a badge back.

Ok, so this isn’t actually in San Francisco but if you think I’m flying all the way to California and not visiting Yosemite, you’re crazy.

I’m booked on a day trip out to Yosemite and it’s gonna be a long day, but so worth it because I just know that I would be really disappointed if I didn’t go.

Is there anything I should add to the list?

Renting a car abroad for the first time: 11 things to do