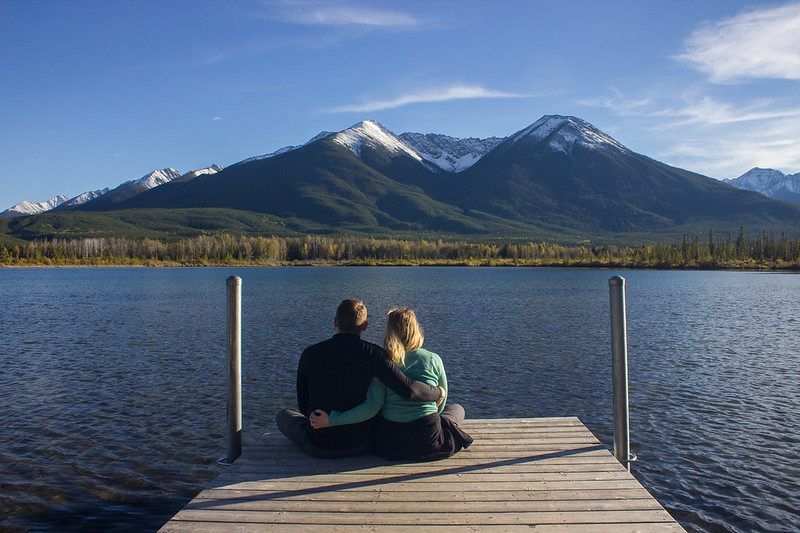 My longing to go to Canada began with my 10 year old self’s obsession with Avril Lavigne (you all had an Avril phase, shut up) and finally, after 15 years, I made it to Canada. The only problem is, it’s making me wish my life away in a way my Nan would tell me off for.

While we were sat in the airport we began planning our return. There are other places on our travel list but I don’t even want to entertain the idea of visiting another country until I have returned to Canada.

Our plan is to visit next Summer and it cannot come soon enough. My Nan would go batty if she heard the amount of times I’ve said “I can’t wait to go back,” in the past two weeks. 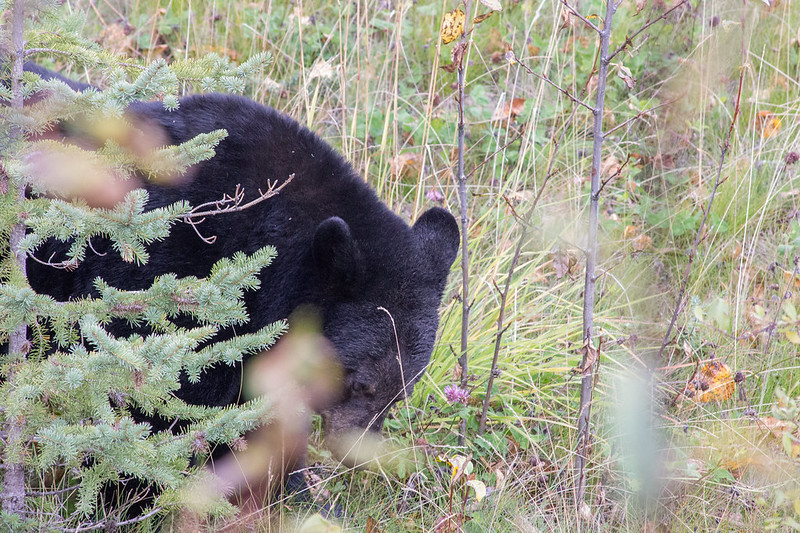 You can see bears and giant, antlered beasts at the side of the road

In England, the thing you’re most likely to see at the side of the road is litter and a dead squirrel. In Banff and Jasper, at least, you can see bears and huge elk.

We tried not to get our hopes up about seeing a bear but we both really wanted to see one. The Canadian roadside gods must have heard our silent pleas to them because we ended up seeing two bears. 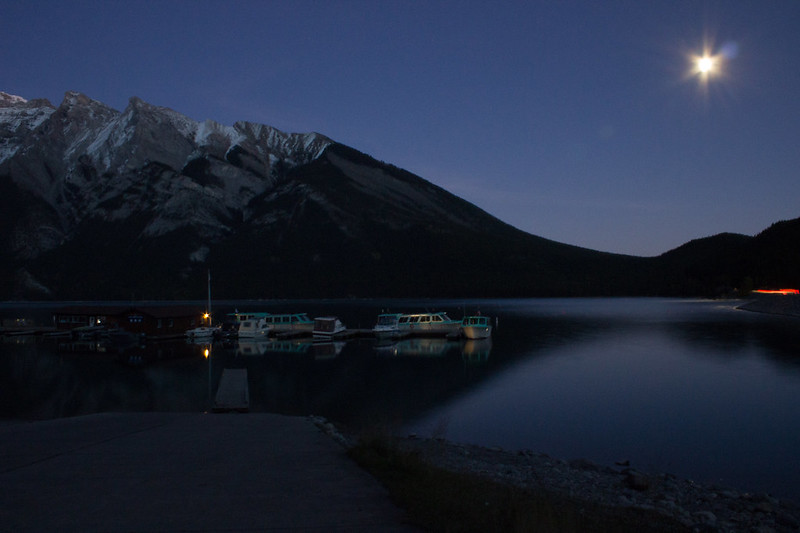 I didn’t see the milky way

It was unseasonably cold for the start of September and pretty cloudy most nights. I’m yet to see the milky way with my own eyes and since Jasper is a dark sky preserve I thought I would come home having seen the milky way. Due to the cloud, there was no chance of seeing it, so I’ve got unfinished business with the Canadian sky. 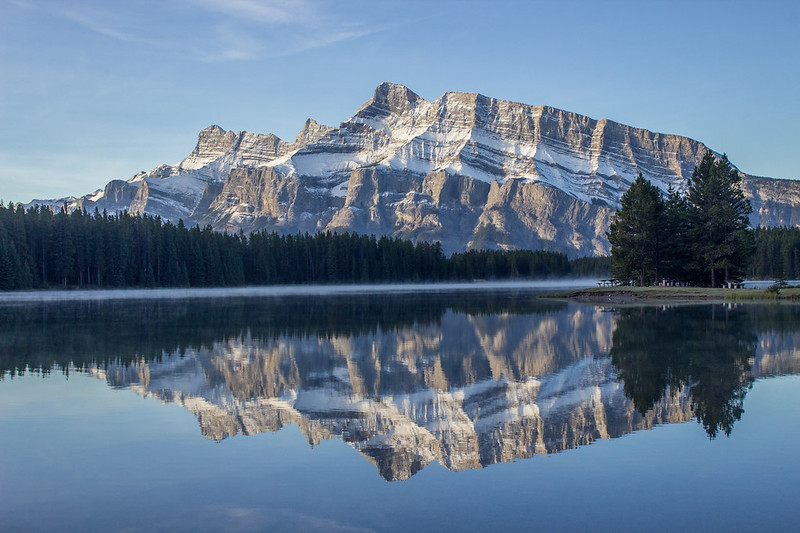 I’m convinced some of the scenary was CGI

While we were driving down the Icefields Parkway, we literally could barely believe our eyes. The Rockies didn’t even look real to us. We kept saying it looked like someone had just stuck them in, because the snow capped mountains looked so perfect and so clear. 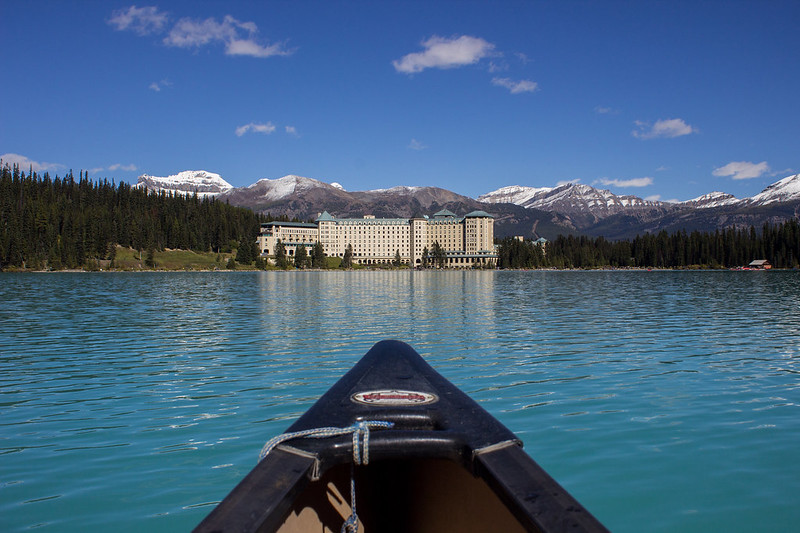 And the lakes? Don’t even get me started on the lakes. The lakes are so teal and blue that they look like a painting you could smudge if you tried to touch them. One of my favourite memories of Canada is when we hiked up to the Lake Agnes teahouse. 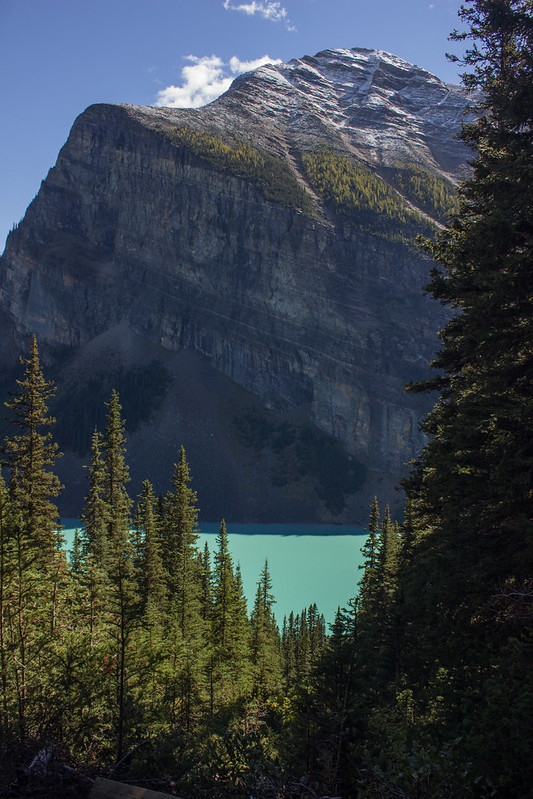 At a couple of points during the trail, there’s a gap in the trees and you can look down and see a glimpse of Lake Louise which looks the most ridiculously shade of blue you could imagine. I am 99% sure it was cake icing, like some kind of showstopper challenge from the Great British Bake Off, or something BECAUSE LAKES AREN’T THAT BLUE, SURELY?

So, I need to go back to make sure the mountains and lakes are definitely not CGI, or cake icing. 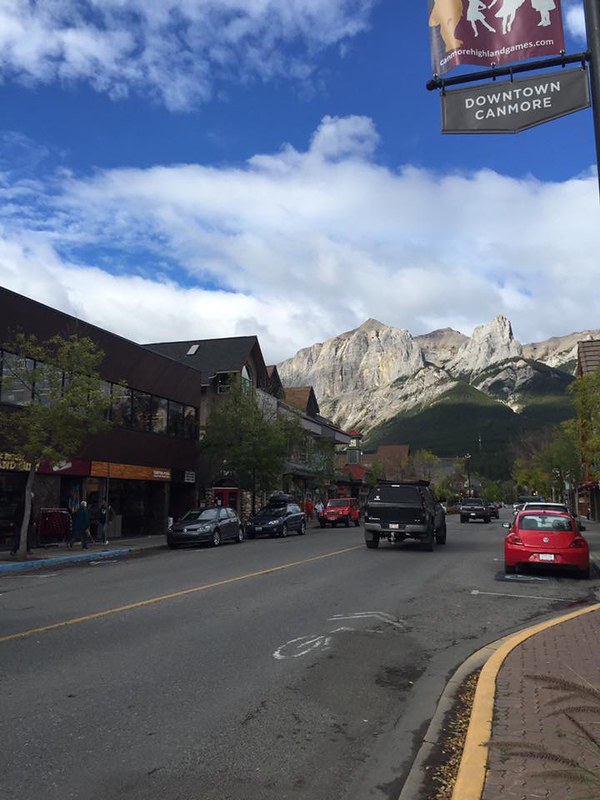 I now know exactly how my Mum feels about Ireland; Canada just felt like home. It felt like I was supposed to be there and once I’ve finished my masters, the Canadians can look out because I’m determined to move there. (Parks Canada, if for some reason you’re reading this, I would honestly love to work for you guys testing water, looking at pollution…please?)

Of course I could make poutine myself, but I feel like poutine is like Guinness in Ireland and is much better in it’s home country. 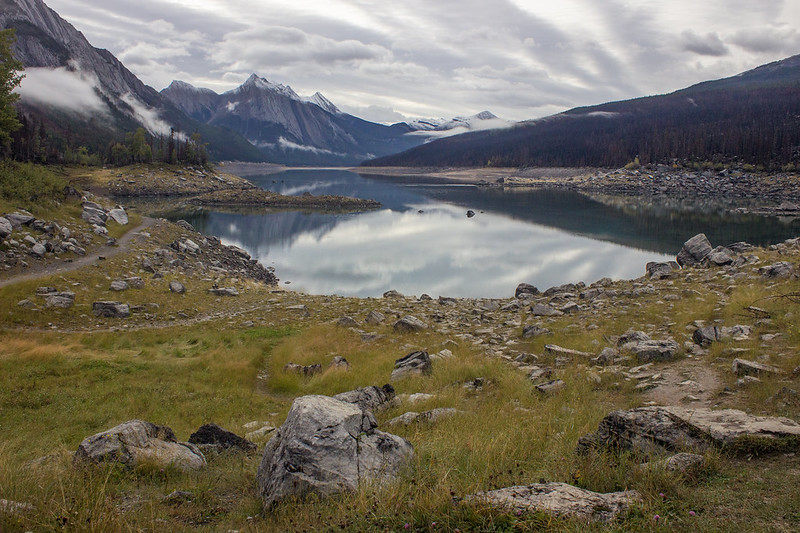 The guy on boarder control that annoyed me

Look, I know that boarder control are supposed to be hard faced and a little snarky because they don’t want people sneaking in and staying forever. This is a snippet of the conversation I had with a guy at boarder control:

Boarder control: Why are you visiting for seven days?

Me: Because I’ve just been to San Francisco, and this is all my holiday used up.

Me: Because it’s beautiful.

Boarder control: At this time of year?

Ok, sir, if you think Canada isn’t beautiful in September;

Plus, I hope I get you next time and I can tell you I’m coming back for two weeks because you were suspicious about a seven day visit. Maybe not, that kinda comment sounds like something that would stop me entering the country – a little bit like when UK border force told my Dad to stop making daft comments or she’d be looking at his sun tan from the inside, BURN! 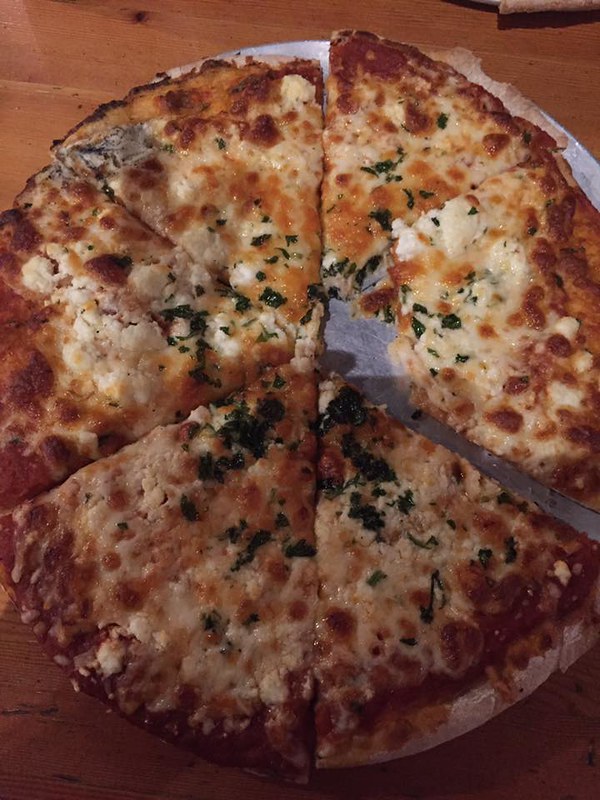 The best pizza in the world

If you’ve been reading my blog for a while, you will remember that two years ago I declared a little pub in Germany as having made the best pizza in the world. I have eaten a lot of pizza since then in my quest to find a better pizza, and the Canadians rose to the challenge.

While we were staying in Canmore, we went to the Rocky Mountain Flatbread Company, where they have a huge pizza oven in the corner of the restaurant and oh my goodness. The pizza it creates is one of the best things to ever touch my taste buds. It is, easily, the best pizza in the world and if you think I’m only eating that pizza once, you are delusional.

We didn’t get to go to Lake O’Hara

Nestled in Yoho National Park, Lake O’Hara is an exclusive lake. The area is so special that it’s essentially ticketed. There are three ways to get in:

You cannot drive in, and the road from the car park is about 11km long. I’m hoping that we will be able to get a bus pass and squeeze in a visit, because it looks absolutely stunning. 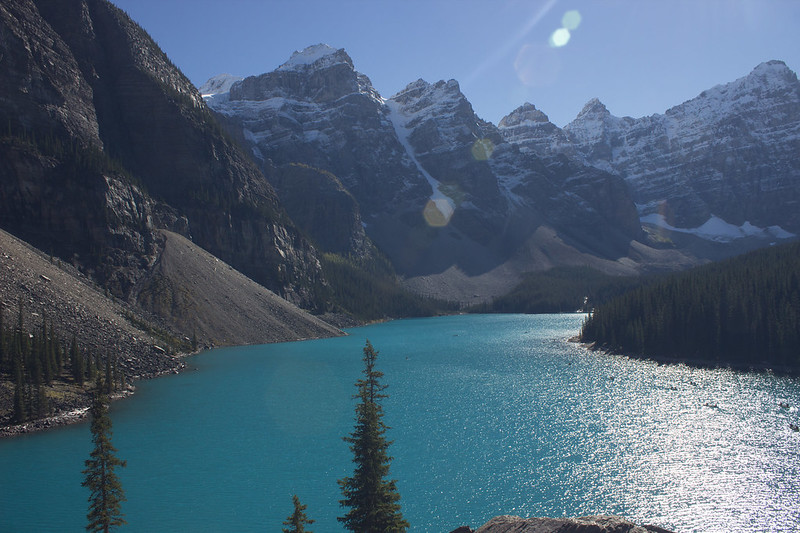 There are lens flares on my photos of Moraine Lake

Horrendous, I know; it was too sunny and I need to go back and take some more photos.

It seemed like every lake we visited (apart from Maligne Lake, which tried to kill us and end our bright canoeing careers far too early) was more beautiful than the last, so it makes sense that the last lake we visited was the most beautiful.

The water was a stunning colour, it was actually sunny, and so peaceful; apart from the Instahooligans who were straying off the path, hanging hammocks, and climbing over rocks to get the most Instagram-worthy photo.

Instahooligans, by the way, is the name I’m giving to idiots who don’t care for protecting the beautiful places they’re in and wander off the paths, trampling foliage, to get the “best photos”, despite the signs asking people to stay on the path to allow plant regrowth….See, Parks Canada, I am already incredibly passionate about protecting Canada. In fact, I might just have created my own job; Instahooligan repeller. I will hide behind rocks and in bushes with a large water gun and soak any idiot who strays off the path because they want a “better photo”. Don’t worry, I’ll provide my own cape. 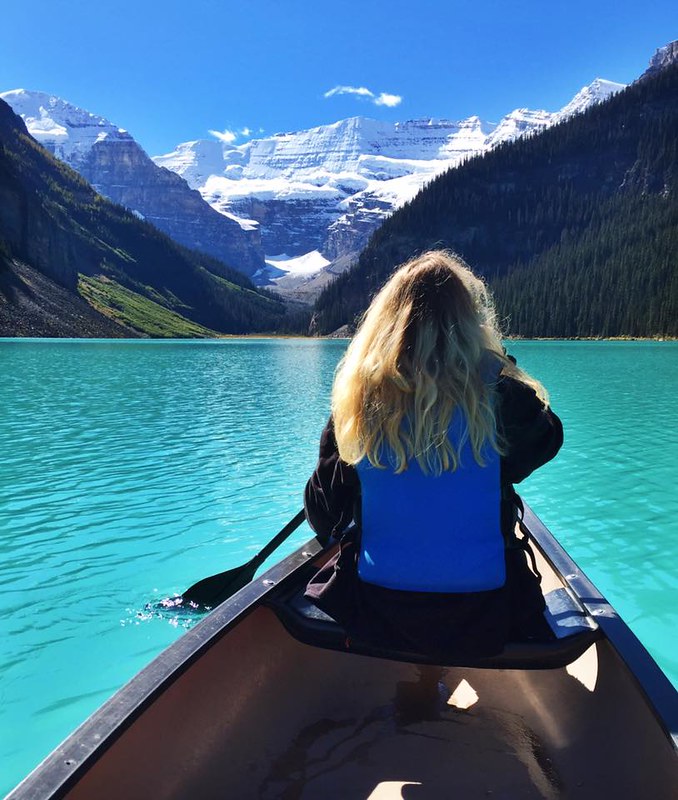 I know I can be better at canoeing

Maligne Lake was not kind to us with the wind, waves, and tour boats and made it pretty hard for us to actually get anywhere because we could not canoe against the wind and waves. We had a much better and significantly less stressful canoeing adventure at Lake Louise, but I am determined to visit Maligne Lake on a calmer day and show it who’s boss. 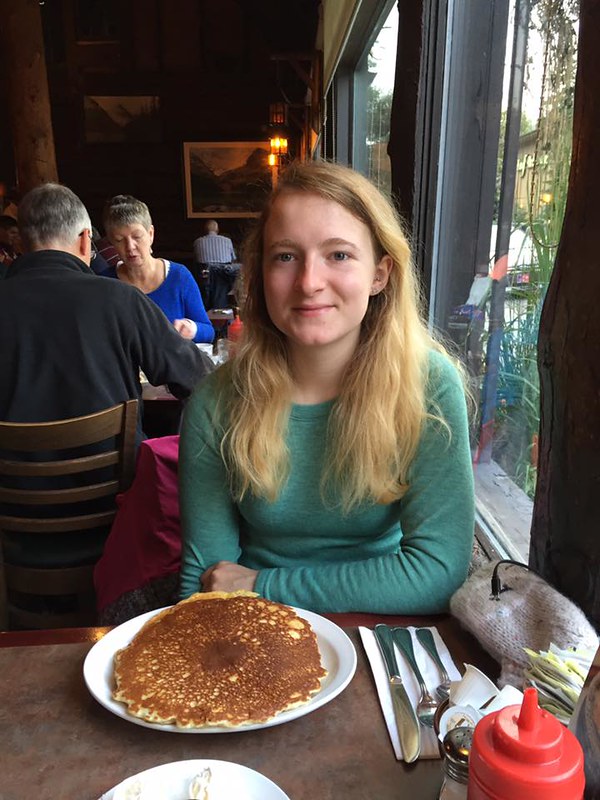 Honestly, I think one of the best dates you can ever go on is a breakfast date. We went out to Melissa’s Missteak in Banff one morning and I ate the biggest, and most delicious pancakes ever.

In the UK, when you go out and order pancakes, they are tiny little things, but not in Banff. In Banff, you get delicious, thick, fluffy pancakes that are bigger than your head. 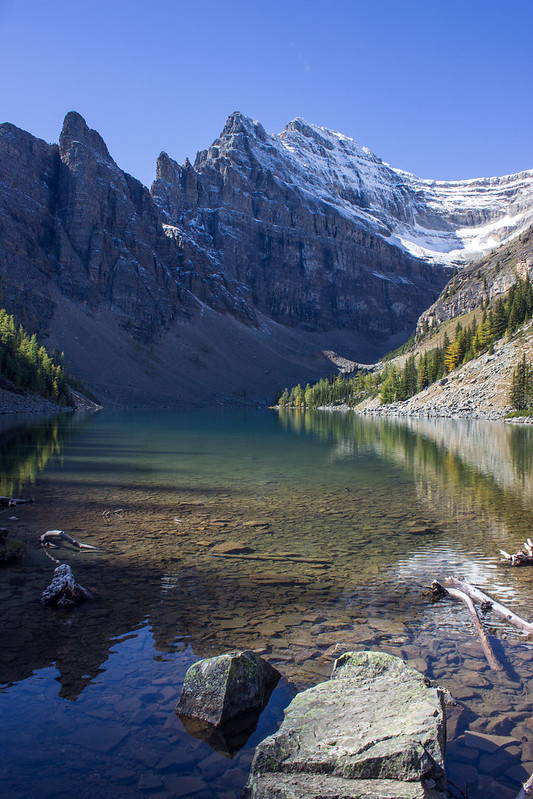 Since most of the places we wanted to visit were right at the edge of the Icefields Parkway, or had carparks next to them, we didn’t do that much hiking. So when we did hike, we discovered how unfit we actually are.

The Lake Agnes teahouse hike was an eye opener and we kinda tentatively thought about doing the Plain of the Six Glaciers, but hadn’t got it in us. There were a couple of other hikes we wanted to do but just didn’t have time to fit it in.

We’re determined to return to Canada fitter, and do a bit more hiking.

I don’t know if this is a cultural thing or not, but it seems like in England when people go on holiday we like to ask people if they saw “any trouble”, or litter. I really don’t know why.

We actually tried to play spot the Police Officer but it was so hard. We saw one Police Officer during our entire trip, and she was eating breakfast with a friend, either having finished a shift or about to start.

Everywhere we went seemed so relaxed, the people were friendly and polite, there was no hassle, or litter. <– Pretty much everything a Brit wants when they go on holiday.

I want to get back on that Pokemon gym in Calgary Airport, and find that Taurus in Canmore

I’m not the biggest Pokenerd I know (believe me, I know a lot, including my boyfriend) but I did just about manage to get a spot on a gym in Calgary Airport. It’s only the second gym I’ve ever got on (the first one is at my work, which of course all the staff love) and I feel it is my duty to improve and take the gym next time, even if it’s just for 10 seconds.

On the last morning we stayed in Canmore, my boyfriend spotted a Taurus and we didn’t quite manage to find it. We were hoping to return home with some new, exotic Pokemon but the Taurus eluded is – not next time, Taurus, not next time. 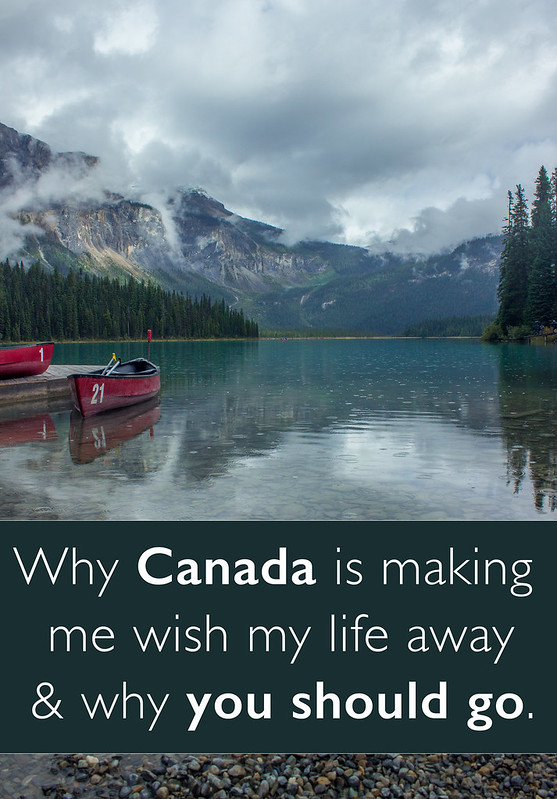 Have you ever been anywhere that’s felt like home and you’ve longed to go back to?

Glen Coe – Scotland – The most beautiful place in the world?