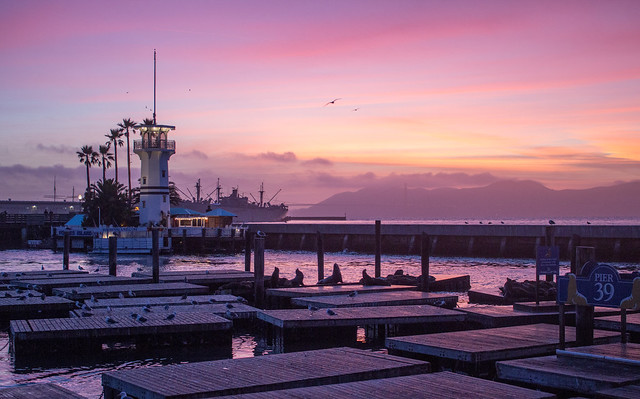 Three and a half days in San Francisco is nowhere near enough to see everything the city by the bay has to offer, but it was just enough time to tick off all the big things I wanted to experience.

Not only did I get to visit a beautiful city, I also got to meet one of my favourite bloggers and friend, Cat from Oddly Lovely and explore the place she calls home with her.

Refreshed from a lot of sleeping on the plane (about 75% of the 11 hour flight), I was completely up for Cat’s suggestion of heading into the city and seeing San Francisco for the first time. 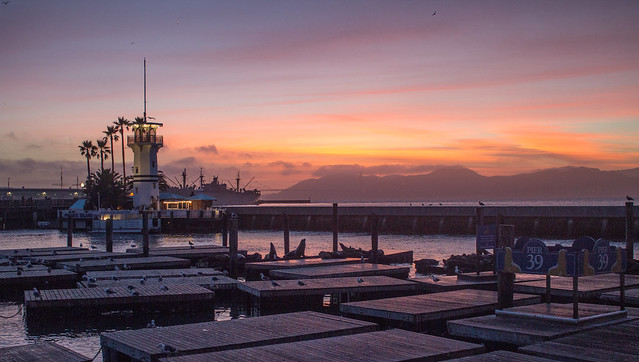 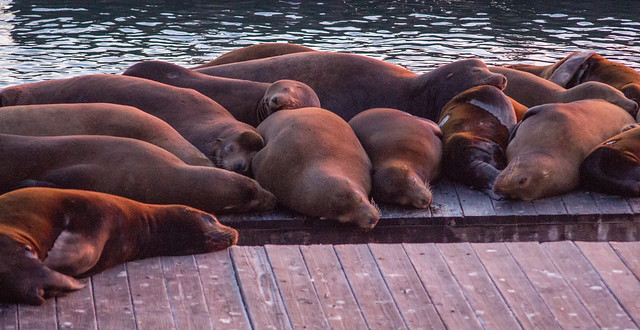 While I couldn’t quite make out the Golden Gate Bridge through the evening fog, I was treated to one of the most beautiful sunsets I’ve ever seen. I remember watching it, while the sea lions of Pier 39 barked and grumped at each other, and wondering if the sky had been Photoshopped because that’s exactly what it looked like. I don’t ever remember seeing a sky look so ridiculously perfect and like it’s straight out of one of the Instagram pages I follow.

Because no trip to anywhere is complete (for me at least) without a trip to the Hard Rock Cafe, we filled up on delicious food and began comparing the differences between the UK and the US.

With a stomach full of spicy macaroni cheese, I slept pretty soundly. 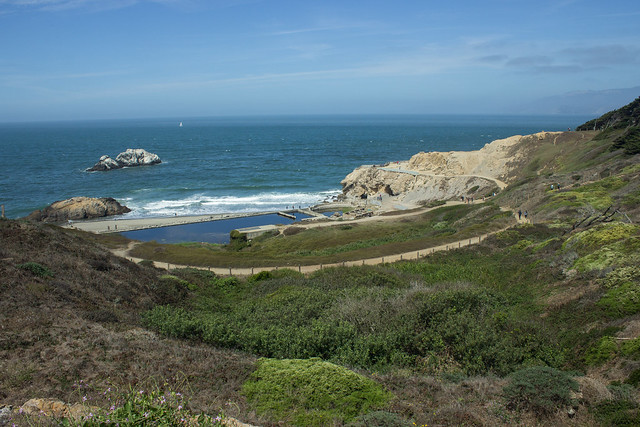 Before I got out there, Cat had been asking her friends what we should do, and so many of them suggested Land’s End. Now, I have been to Land’s End in Cornwall and I feel like Land’s End in San Francisco is significantly better. For starters, it was not foggy, cold, or wet; it was warm with a gentle breeze, very blue, and just better looking.

With the fog having already cleared, I got my first proper view of the Golden Gate Bridge and it is a beauty. 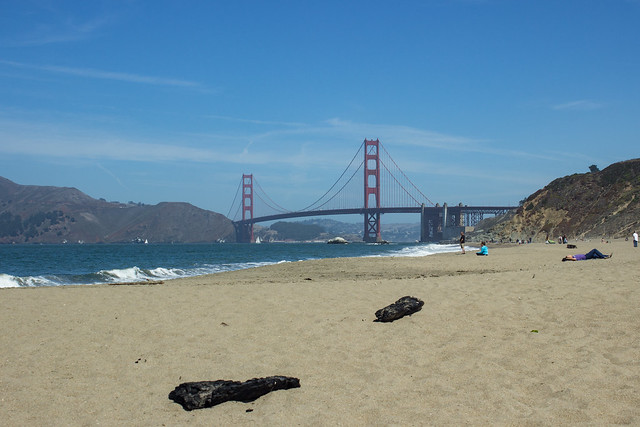 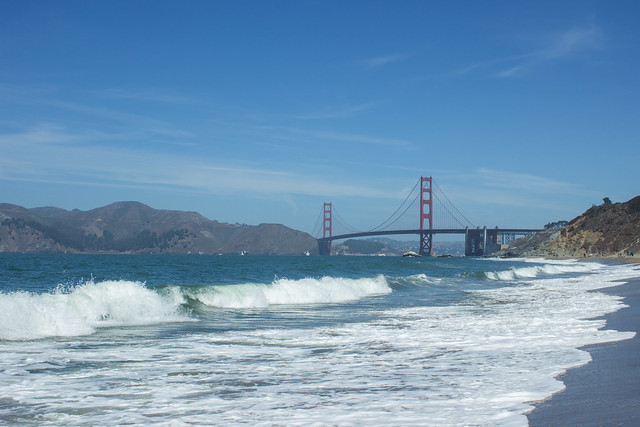 Because I wanted a better look, we headed on down to Baker Beach to burn our toes in the sand and dip our feet in the water. 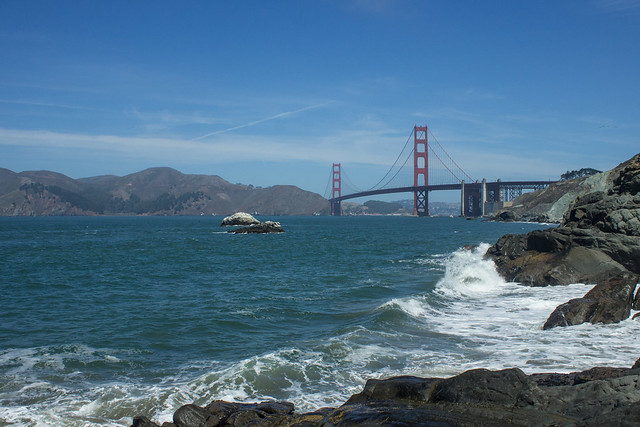 I’m sure this shot is a lot easier when the tide is out, but it required clambering over rocks and if you met my boyfriend you would quickly find out that he calls me “shit cat”; I’m very good at getting up things, but absolutely appalling at getting back down. I just have no balance when it comes to getting down things, and the amount of times I have almost destroyed my camera doing so is endless – I should probably get that thing insured. 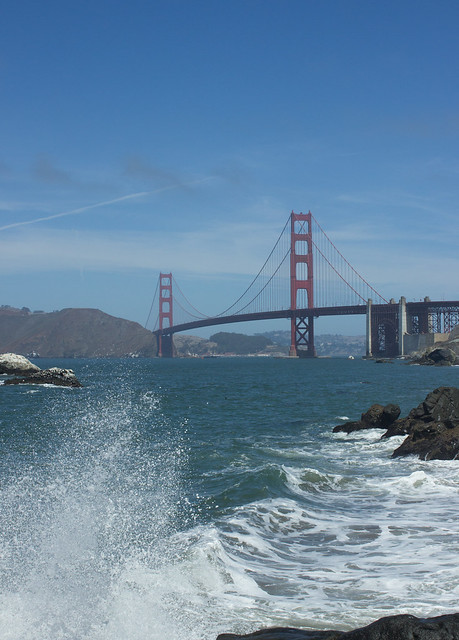 If I could have called the Fire Brigade to get me down off the rocks, I probably would have.

Fortunately, my camera and I made it down in one piece.

In the UK, we have this little ol’ chocolate brand called Cadbury’s and in our opinion it is the best chocolate in the world; it is a British institution and we were fuming when Kraft brought it (and we are still very bitter about it), and American chocolate is disgusting. (Incidentally, ‘American chocolate’ is more disgusting now because we are convinced that Kraft are going to change the recipe and turn our beloved Dairy Milk into something disgusting. So much so that we revolted when they changed the Creme Egg recipe – yeah, so this and the Great British Bake Off being sold to another TV channel is the kinda stuff that really riles us Brits up…never mind the important stuff like the NHS being privatised by our scummy government. That got political quickly…) 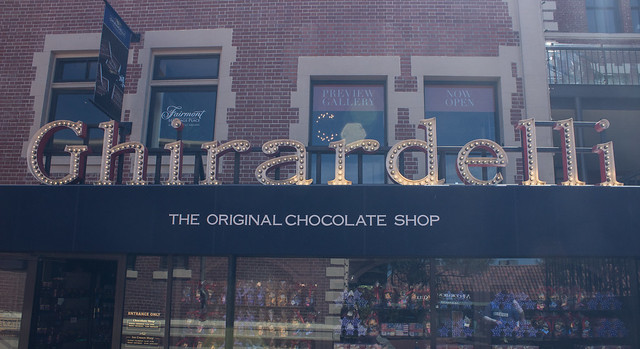 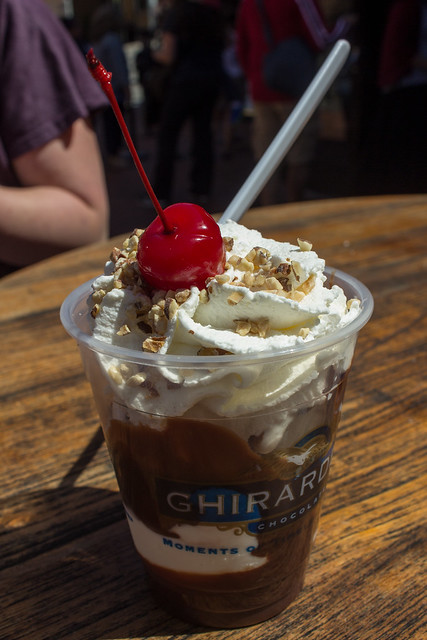 Cat was determined to prove me wrong and destroy my perception of American chocolate and she did an amazing job by taking me to Ghirardelli’s to experience their chocolate and legendary fudge sundaes. Prove me wrong she did because it was far from disgusting and I long for that sundae now.

We headed on back down to Pier 39 to watch the sea lions again. They’re such funny little characters and after watching them for a few minutes you kind of get the feeling they like playing up to all the attention.

I watched those two sea lions for minutes, trying to wrestle each other and pushing each other off the pontoon / whatever it’s called, only for the other one to get back on it and they’d start all over again.

A big day in the city wore us out and we vegged out watching the Great British Bake Off (I CAN’T BELIEVE AMERICA DOESN’T HAVE THEIR OWN VERSION!), and went to the best cinema in the world (because it had sofas and sofa-service food) to watch Hunt For The Wilderpeople – which, by the way, is hilarious and well worth a watch. 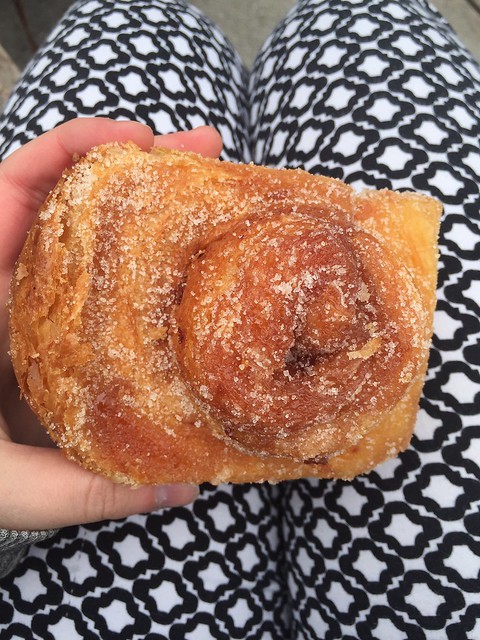 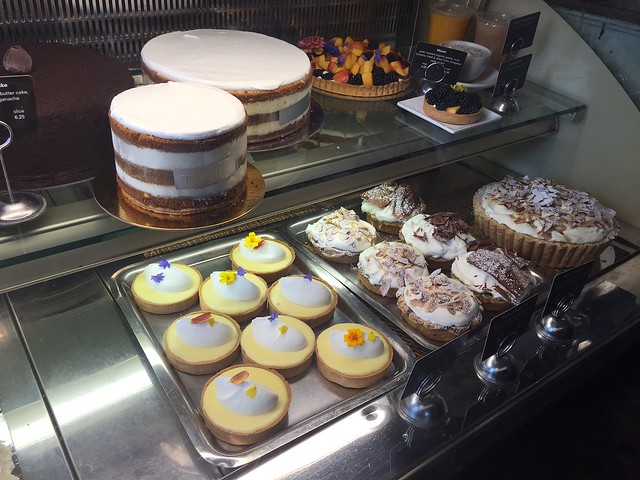 My second full day in San Francisco started in the best way possible; delicious pastries from Tartine. Honestly, if you ever visit go and try one of their Morning Buns because it is like sex in your mouth; it’s like a cinnamon bun and a sugary doughnut had a baby…a delicious baby. 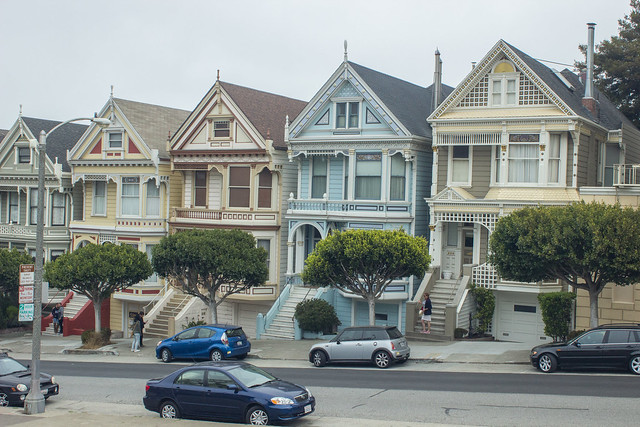 Saturday was pretty chilled out in comparison to Friday, and we visited the Painted Ladies, marveled at the beautiful houses, and strolled down Haight-Ashbury. 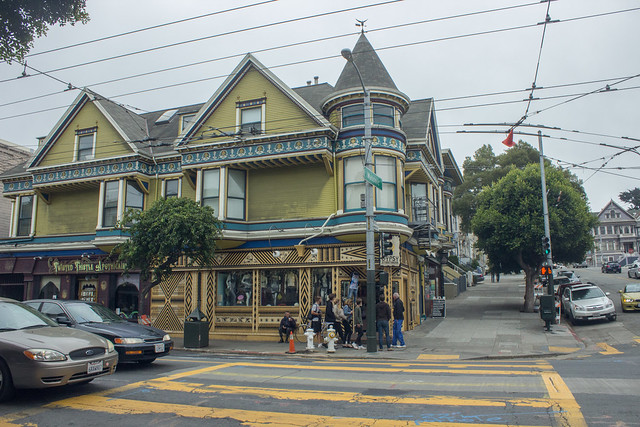 I’d been really excited to visit Haight-Ashbury before I went and I’m kinda glad Cat told me not to get too excited because it wasn’t quite as good as I expected it to be. Sure, it was fascinating and really interesting to hear about the history of the place, but I guess it’s never going to be as good as it was during it’s inception. 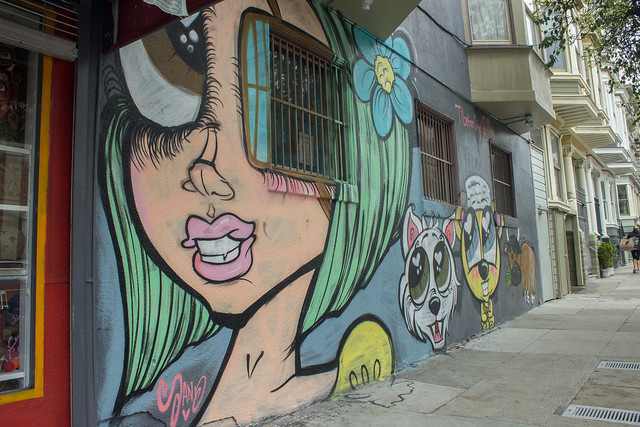 We slipped into Amoeba Records and I very, very nearly ended up trying to figure out how to stop baggage handlers destroying a vinyl record but I thought better of it and left the store empty handed, but very jealous of the fact I don’t know of a record store like that anywhere near me.

We thought we did pretty well getting up early to head on over to Muir Woods, but unfortunately it was not early enough and their ridiculously small car parks were full and we had a good 30 minute trek from the car to the ticket desk. 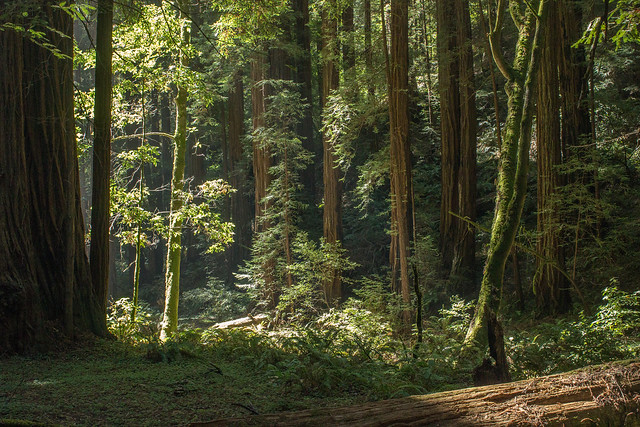 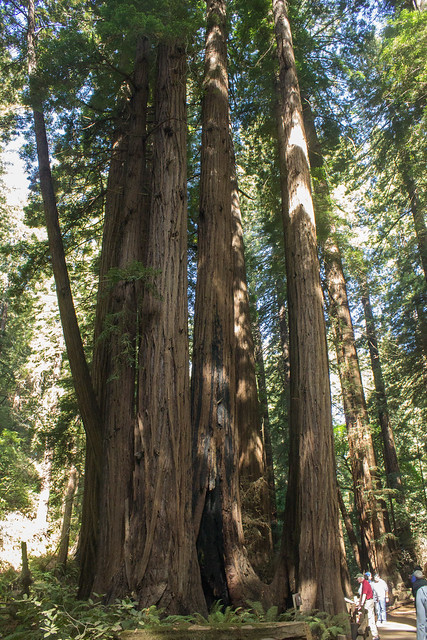 The walk was well worth it though, because being able to stand amongst the red woods and take in the strange, fairytale-like light was incredible. Unfortunately, I couldn’t capture this light all too well, but you’re just going to have to believe that it looked like a unicorn might step out of the shadows at any point.

Another thing I managed to tick off my list was drinking Snapple again. I know, I know, it’s a weird thing to want to do on holiday, and you can get it in the international section at Tesco – but it costs a fortune! Though, I’m sure it’s cheaper to spend a fiver on a bottle of Snapple than about £250 on a flight to San Francisco…we’ll just ignore that.

I didn’t know before I went, but San Francisco is pretty famous for it’s literary scene. Cat took me to City Lights, the most famous bookshop in SF, and told me all about the Beats and the Beat Movement in the 40s and 50s.

We picked up delicious Mexican food on the way back, watched some more Bake Off and ended the trip with a round of trivia, which we didn’t actually fail too badly at.

The next morning, I was up very early for a trip to Yosemite, which I will be fangirling about sometime soon.

If you ever have the chance to visit San Francisco, I highly recommend it and I’m sure I’ll find my way back there in the future to explore the city again. 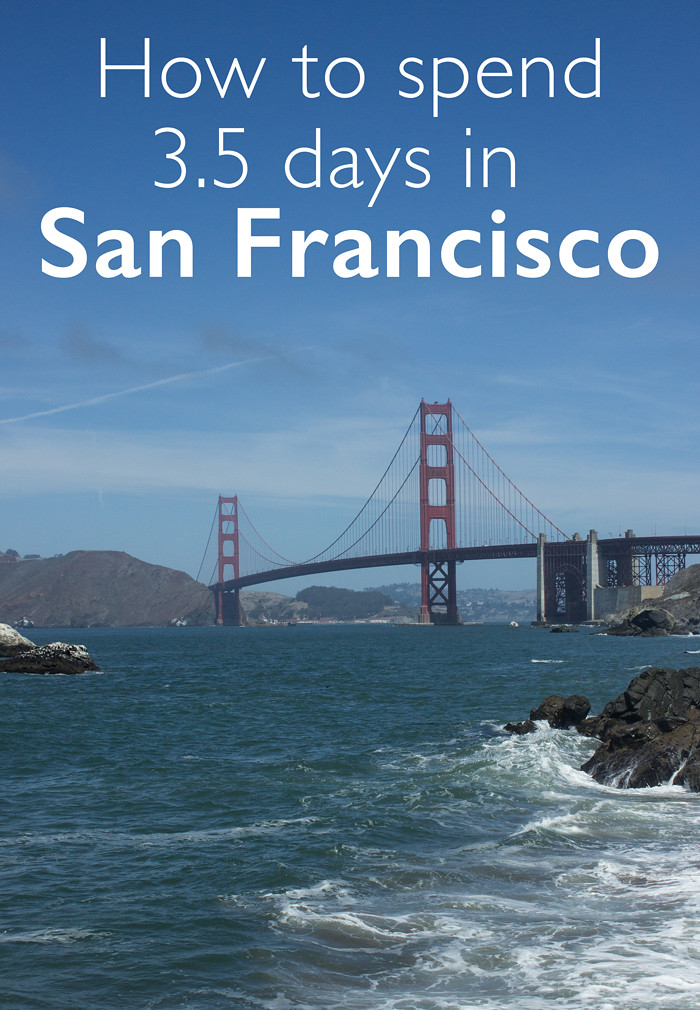