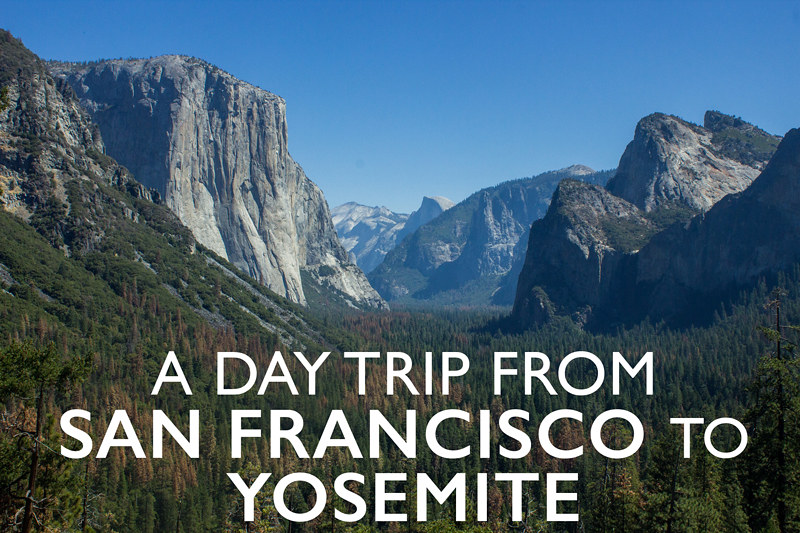 There was no way I was going to visit California without stepping foot inside Yosemite National Park. I knew that a day trip from San Francisco would be a long day, but would be more than worth it to get to look up and see El Capitan and Half Dome with my own eyes.

After hours of searching, I settled on a day trip with Extranomical Tours because they seemed to offer the most time in the park.

I was picked up from outside the Hilton Hotel in the middle of San Francisco at about 06:00. If you’re staying in the city centre, Extranomical offer pickup from hotels and the BART runs early in the morning so getting there shouldn’t be a problem, unless it’s a holiday. (Of course I chose to go on a holiday, so, shout out to my buddy Cat for getting up way to early and driving me.)

On our drive out to Yosemite, and our first comfort stop, our tour guide, Vlad, told us about San Francisco, what it’s like to live there (super expensive!) and in the surrounding areas. Vlad was a great tour guide and I didn’t envy him having to drive and talk to us for 15 hours (I’m sure that’s not even legal in the UK), but he was so passionate and into what he was doing even at the end of the day, when the rest of us were dosing off.

The drive into Yosemite is pretty beautiful, especially as you ascend up switchbacks and look down into the valleys. 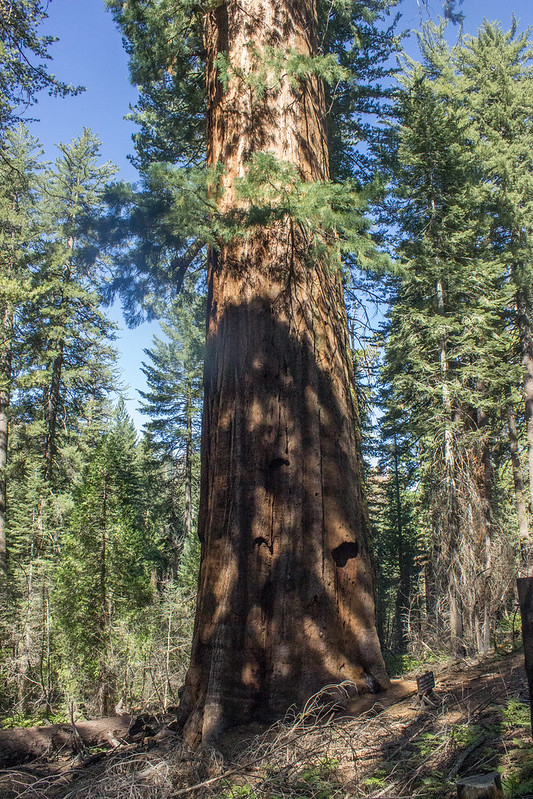 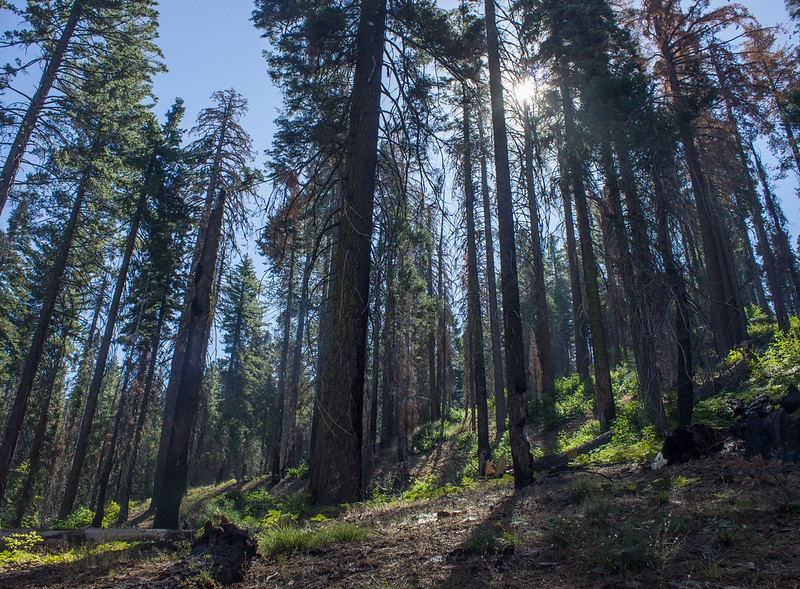 Our first stop off was to see the giant sequoias in Tuolumne Grove, which involves a 20-minute walk down hill until you set your eyes on one of the giant beasts. Unfortunately we only had an hour here, which means you pretty much just about have time to walk down and see one tree, and walk the very steep trek back up to the bus. The forest area itself is pretty beautiful, especially when the mid-morning light sneaks through the trees, bathing the place in this magical glow.

On the way into Yosemite, Vlad told us about where the name for Yosemite National Park came from, and it fascinated me. In the 19th century gold rush, people from all over the world descended upon Yosemite to try and find gold.

In their desperation, they formed a battalion and kidnapped the leader of a the Ahwahneechee tribe and gave him an ultimatum; either you let us come onto your land and look for gold, or we kill you. The tribe leader, sensing he couldn’t win either way, told them to kill him and his land was invaded. Understandably, the tribes people were pretty pissed and kept saying “yos.s.e’meti” to the gold rushers, which translates to “those who kill”. So, Yosemite actually means the valley of the killers.

There you go, I’ve taught you something interesting today.

That said, I researched the history of the name behind Yosemite and there are a couple of different stories. I quite like this one though. 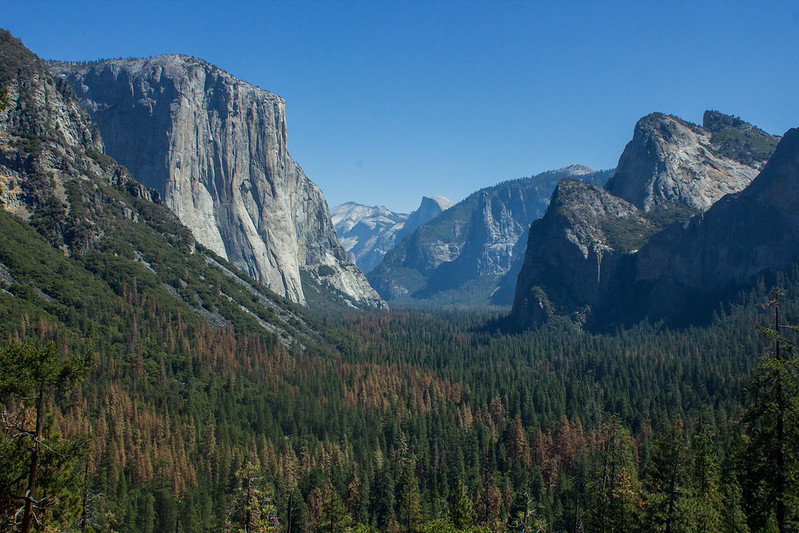 Our first stop off in the park was the aptly named Inspiration Point, which provided stunning views of El Capitan, Half Dome, and the valley.

Don’t be fooled by how peaceful and quiet that photo looks, because directly behind where I stood to take this photo is a car park rammed with coaches, cars and fellow visitors. It is kinda inspiring, but I feel like I would be a lot more inspiring if you didn’t have to listen to people beeping their horns and revving engines. Such is the problem with places this beautiful I guess; you’re kinda in the wilderness, but completely not in another sense. 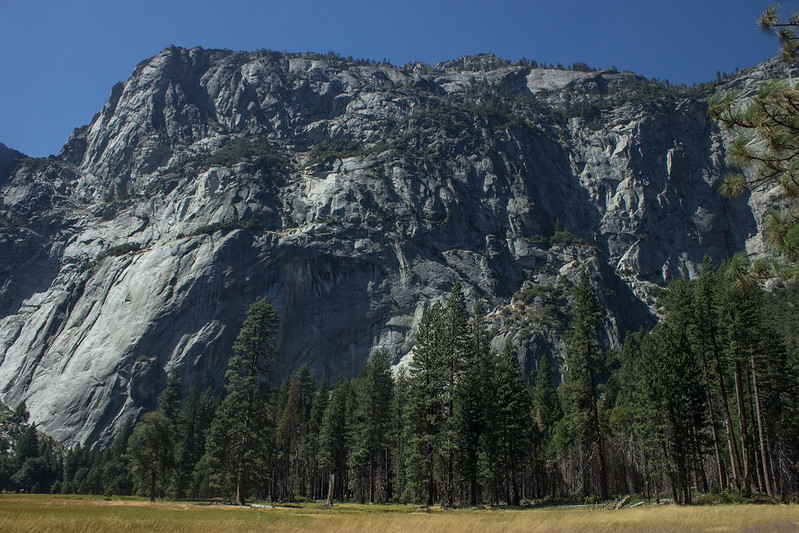 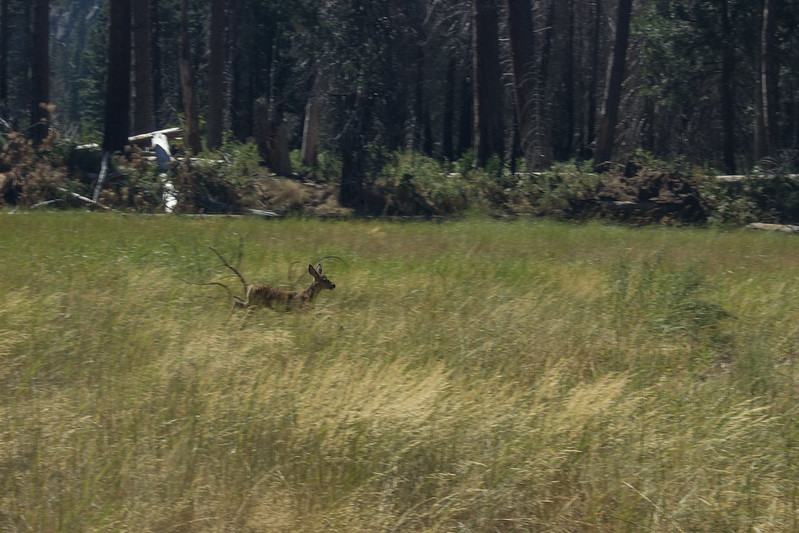 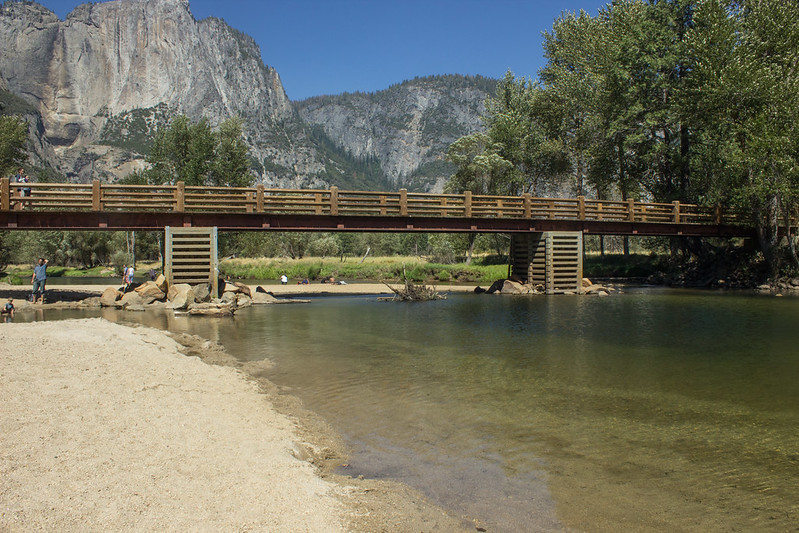 After avoiding being run over, the bus took us down into the valley to stop off for lunch, where I had a couple of hours to see Yosemite waterfall, and dip my toes in the river while taking in my surroundings. 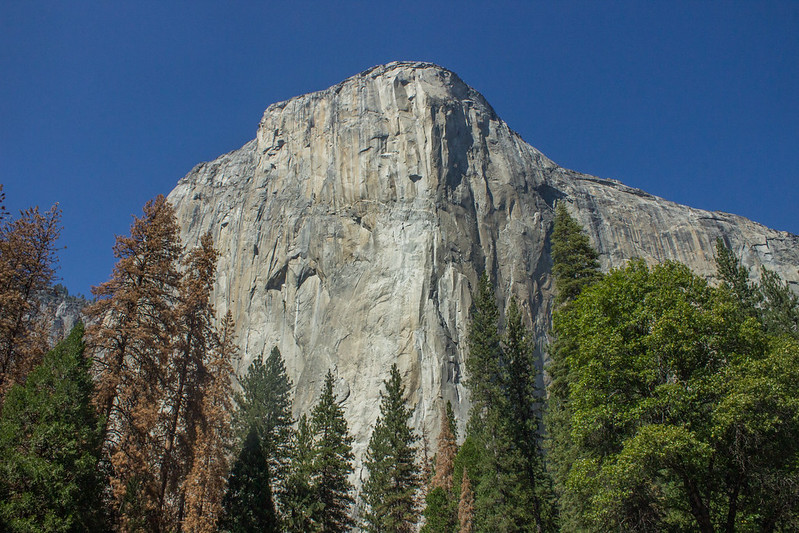 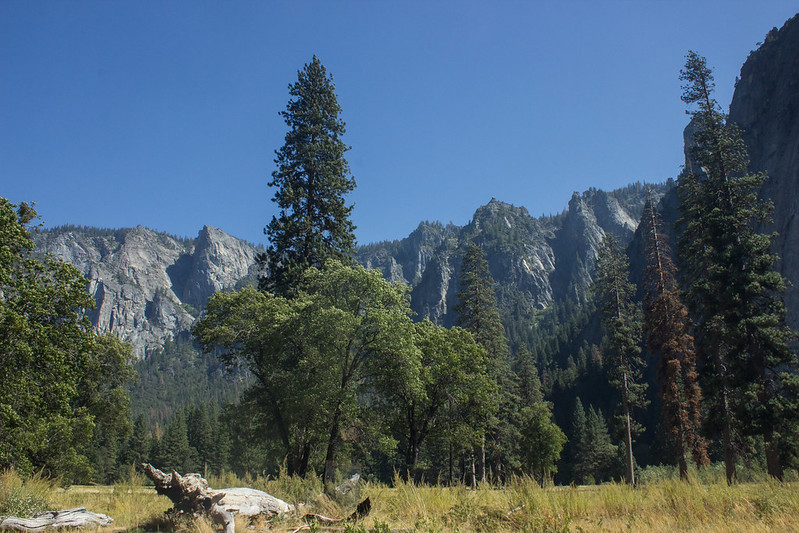 As we left the lodges, our driver pulled over and we got out to play spot the climbers on El Capitan. Apparently the record for climbing up there, with NO ROPES?!, is just over two hours. How? That must take some serious skill, fitness, and balls to do that because it looked huge from where I was standing, let alone climbing up it. 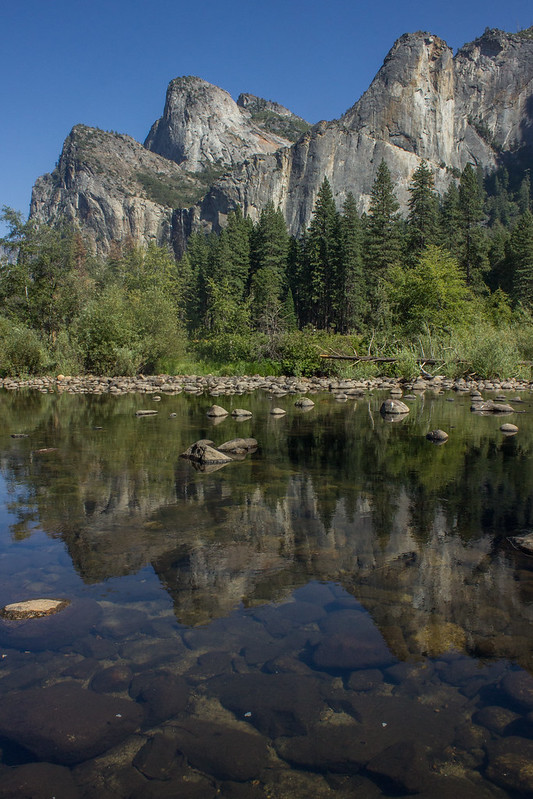 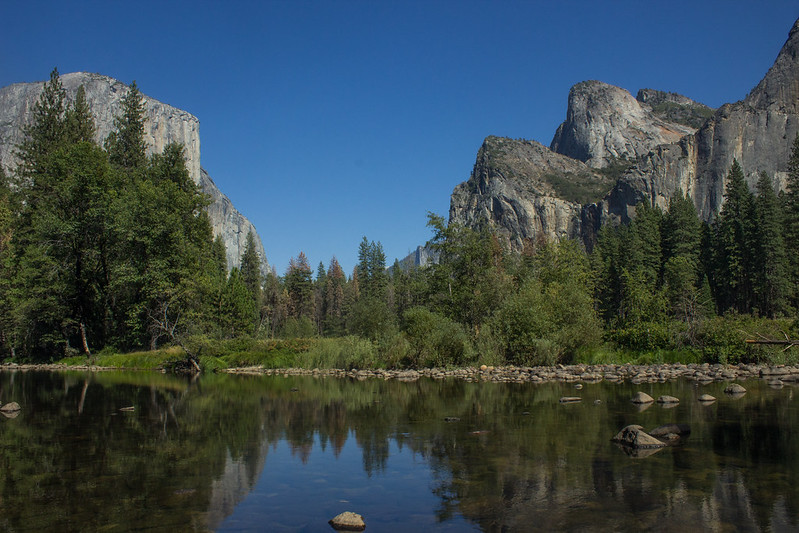 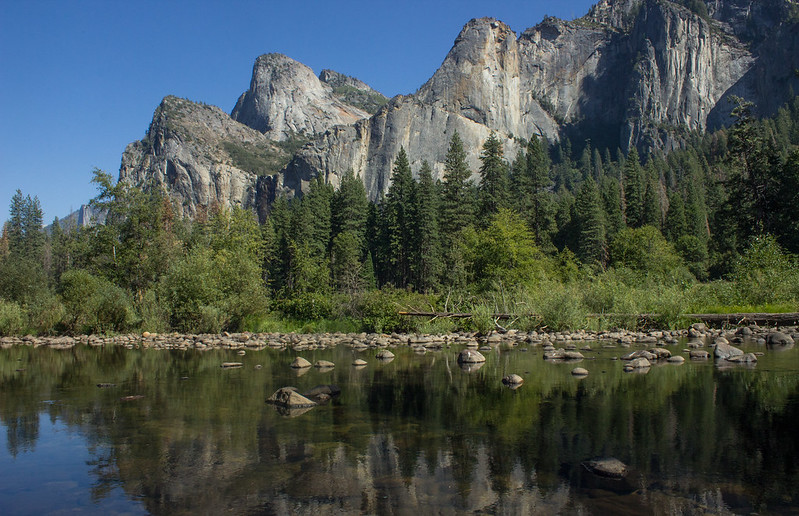 We made one more stop inside the park to see “the bear with the open mouth”, so let’s see if you can spot it.

Old tribes named it “the bear with the open mouth” because it kinda looks like a bear lying down with it’s mouth open. This spot was probably the most peaceful place we went to all day because there was only our coach there and it felt so calm and serene.

The water was like a mirror and I could have stayed there for hours taking it all in. 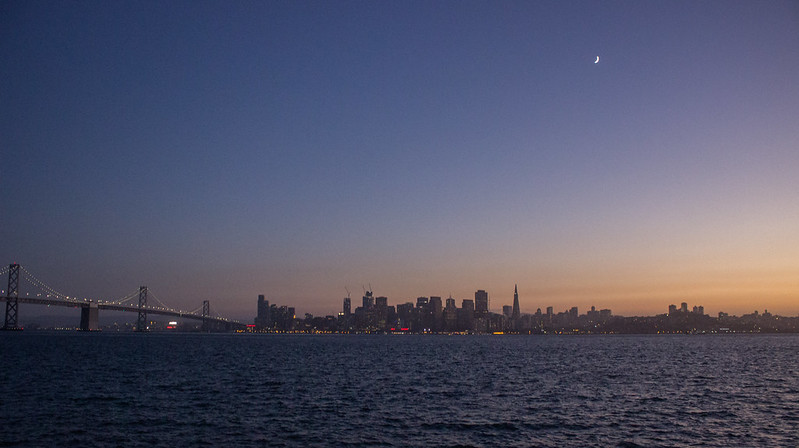 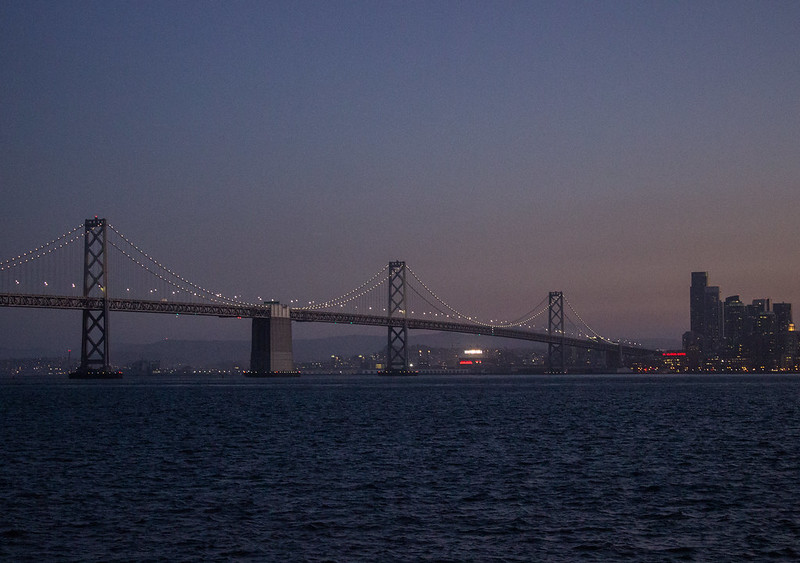 Since it was the end of Labour Day weekend, our trip back into San Francisco took a little longer than expected, but Vlad provided us with the perfect end to the day but taking us to Treasure Island, where we could see the lights of the city twinkling against the sky.

It was such a long and busy day, but boy was it worth it to see Yosemite. It’s one of those places I’ve wanted to see for years, and my plan is to go back at some point and spend a few days in the park; hopefully at a slightly quieter time of year, if such thing exists in Yosemite.

If you do want to take a trip to Yosemite from San Francisco, I can’t recommend Extranomical Tours enough. But do bear in mind that it is a long day and it does feel kind of rushed, and you will see people complaining in reviews about that, but what do you expect? It is rushed and it’s not about chilling, wander about at your own pace day. Yosemite is a three hour drive from San Francisco, so that takes out six hours of your day before you’ve even started. If you want to explore the park at your own pace, a day trip isn’t for you and you’re probably better off staying in the park for a couple of days.

Have you ever been to Yosemite? 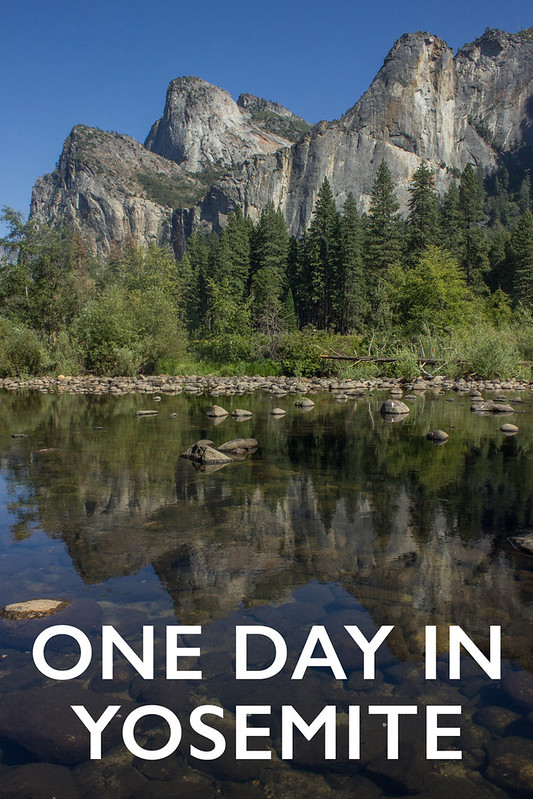 6 days in Stockholm – my itinerary