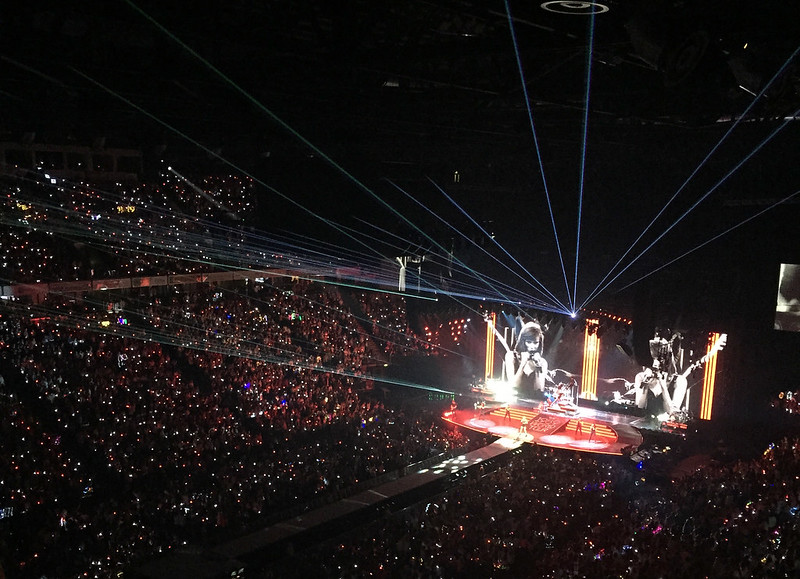 I remember when I first started going to gigs, I’d be there way before the doors opened and I thought it would always be that way. Nah, not so much when you’ve been at work all day. I love seeing music performed live, though I do feel a tiny bit “old” when I go to a gig now.

Gone are the days I used the toilet to change into a band t-shirt I’ve just brought. Nope, I’m going to the toilet because I need to pee. I swear I used to have a bigger bladder…

Ok, so I think the reason I never had to use the toilet for it’s intended purposes was because I spent all my money on band merchandise and had to dehydrate for the rest of the night, and hope security handed out cups of water.

You don’t buy band t-shirts at every. single. gig.

Maybe this is because it cost you about £10 for a bottle of water, or maybe it’s because your wardrobe is already overflowing with band t-shirts, and you don’t really wear them anymore. This is perhaps the saddest sign that you’re “too old” for gigs.

It’s not like I never stand at a gig anymore, but if I can get seated tickets you can bet I’m gonna jump all over those and enjoy the comfort of my seat during set changes.

You rock up well after the doors have opened

I have done my fair share of standing freezing in the British winter waiting for a venue to open doors at least half an hour later than listed on the ticket. I think the worst queuing experience I ever had was when I went to see Paramore at the NIA in December and stood still in a queue for about two hours when it was 4C and trying to snow. Never again.

Now, we’re terribly civilised and go to dinner first and turn up at least an hour after the doors have opened.

In my head I am still 15 years old, so it always horrifies me when I learn that one of my favourite albums came out over a decade ago. What horrifies me more is seeing fans who are actually 15 and realising they were about two years old when the band first started out.

“I’ll just be over here by the doors”

After standing in the cold waiting for the doors, we’d race right to the front and sneak our way up to the barriers, or as close as we could get, while avoiding getting sweat on by strangers or eating a mouthful of hair belonging to the overly enthusiastic head banger in front of us. Nah. Nowadays, it’s all about standing at the side or at the back, away from the chaos.

You don’t go head to toe in black

Ok, so maybe this only applies to former emo kids. You no longer turn up to gigs looking like Richmond from the IT Crowd, and go with whatever is comfortable, and not too sweaty when you’re in a room full of hundreds and thousands of strangers.

NARS, quit pretending to be appalled by animal testing & supporting it anyway