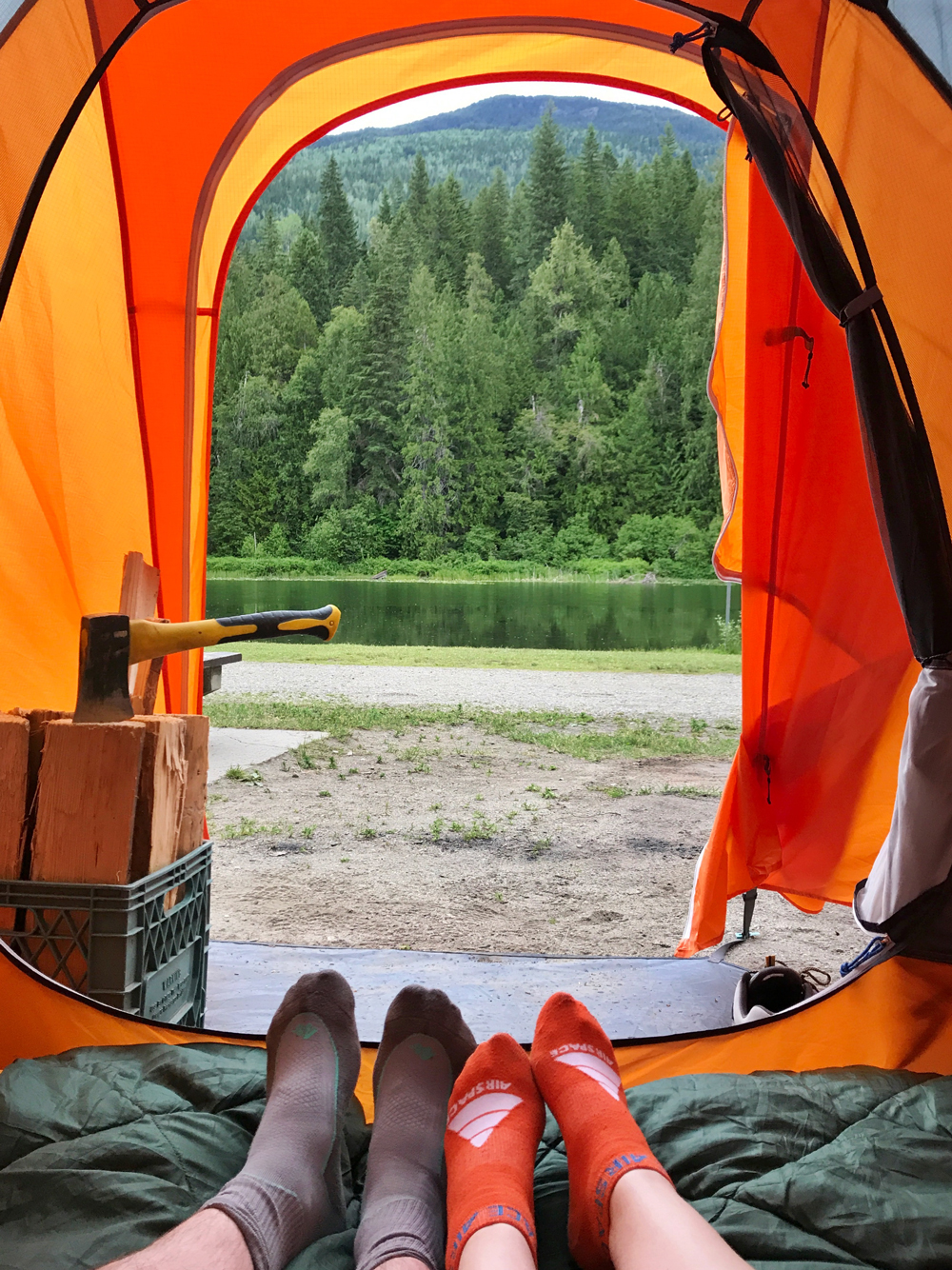 That's right, I am (sadly) back from Canada and geared up to start fangirling about it again; it never ends for you does it, my poor readers? Thanks to jetlag, my brain thought this post up at 3am in the morning and thought it would be hilarious to tell you why you shouldn't go camping in Canada.

I like to indulge the weird sleep-deprived ideas I have sometimes, plus this post involves a reasonable amount of sarcasm, so here are 11 reasons why camping in Canada might not be for you.

...you hate awesome views while cooking

Perhaps you are blessed enough to have beautiful views from your kitchen, but the best views I've ever had while at the stove is while camping next to a lake. Who doesn't want to be cooking up some tasty nom, with a fire warming your back, while you look at a lake that looks photoshopped, thick forest, and jagged mountains?

Canada is pretty darn versatile, so you could also camp in the middle of a forest or even on a beach.

Sure, you might get beautiful views from your hotel but when you're camping, you can open up your tent and be in that view in a matter of seconds. I will never forget waking up and unzipping the tent to see the sun coming up over Two Jack Lake. Daz was smart enough to bag site 44, which is apparently the "crown jewel of pitches in the Banff area", so prepare to feel smug because you've got the best view in Banff from your tent.

You don't need me to tell you that Canada is a beautiful country and the places you can camp are unreal. You can even do backcountry camping, which is like proper wilderness camping. We haven't done it yet but it's definitely on our list of things we want to experience.

...you don't want to know what noise squirrels make

This might sound really dumb, depending on what part of the world you come from. In the UK, we have squirrels everywhere but I have never, ever heard them make a noise. While we were camping in Jasper last year, we were trying to figure out what this loud, squeaking noise was and eventually realised it was the squirrels. They are noisy little critters.

...you don't want to see loads of wildlife

While you really don't have to try that hard to see wildlife in Canada, camping is probably one of the best ways to see it. Two Jack Lakeside is a great place if you want to see elk; we saw a couple wandering around right on the edge of the site and a couple having a drink from the lake one morning. 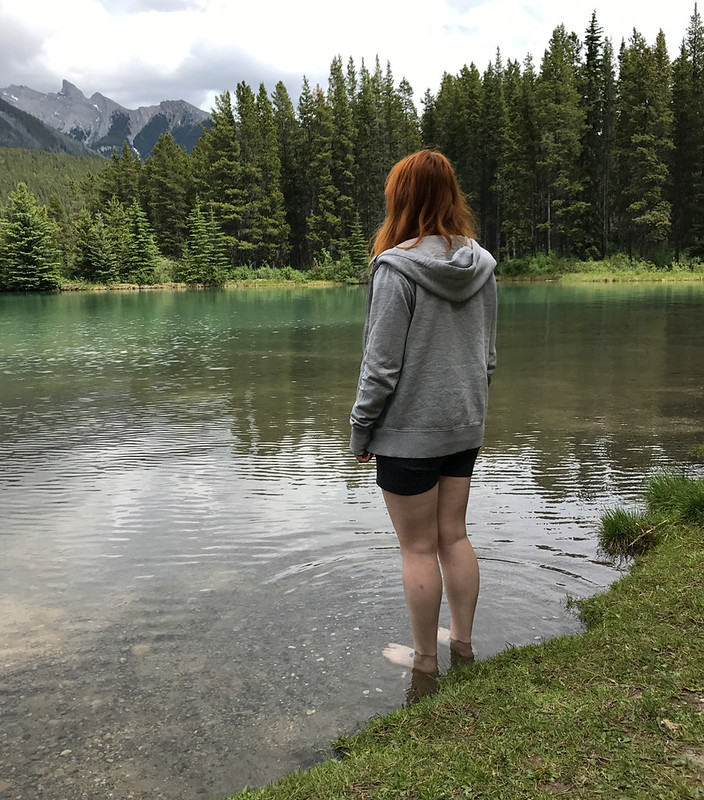 I'm going to preface this by saying that not all campsites in Canada have as much demand as a Glastonbury ticket, but some do. We booked our spot for Two Jack Lakeside in Banff the day pitches were available, and we heard that it had completely sold out for the season in a matter of days. (Again, pitch 44 is what you really want!)

As a general rule, the better the view from the campsite, the more demand it is going to create. If you have your heart set on a site, try to book your spot as soon as pitches are available. You honestly will not find that every campsite sells out within days of going on sale, there will still be plenty of choice. Last year, we visited in September and only booked our pitches in August and we visited some great sites. We even got a pitch at Two Jack Lakeside, I think the demand this year is due Canada's 150th anniversary and free park passes.

Similarly, if you are interested in visiting Lake O'Hara, good luck trying to get tickets. They only allow a small amount of people in or to camp there each day, to protect the environment. We tried to get two bus tickets and they were sold out within a minute. I'm not sure how fast the entire season sold out, but I imagine it was within less than half an hour. Take that, Beyonce. 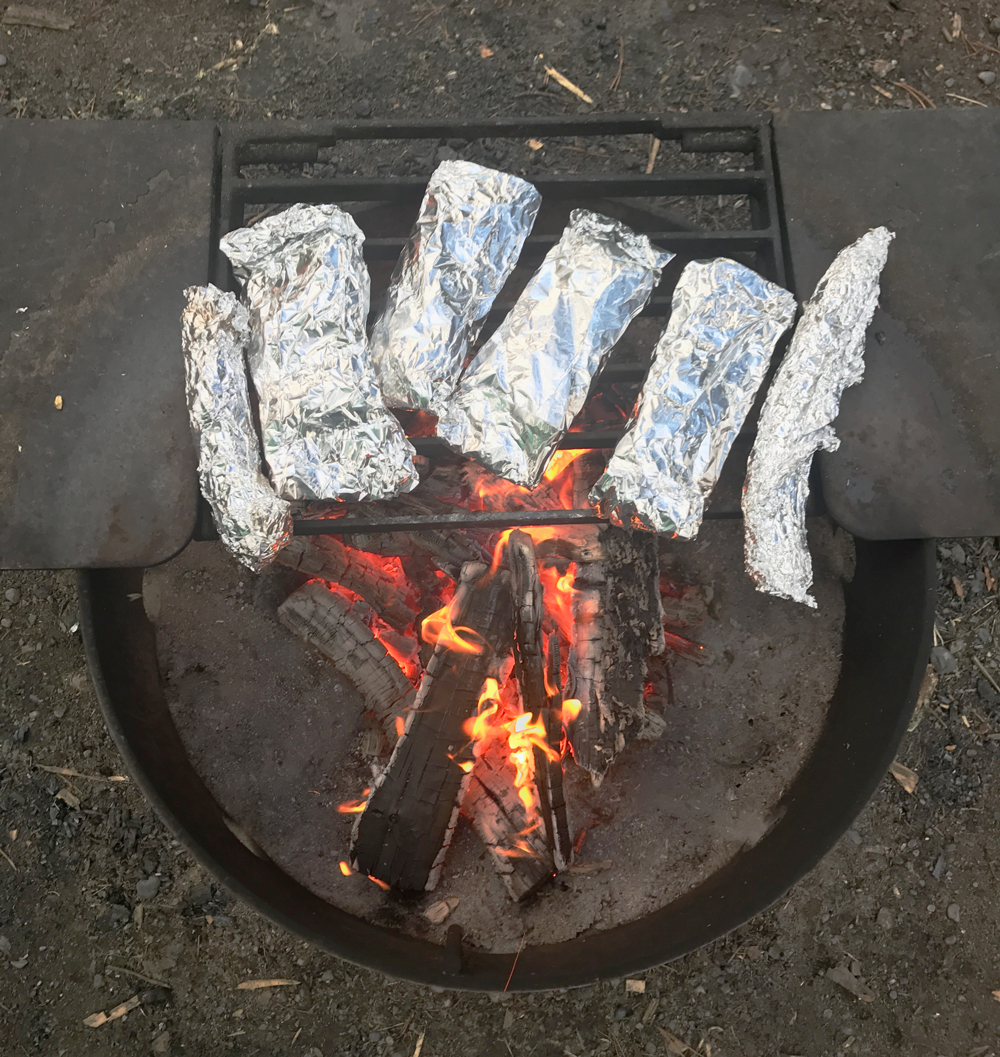 ...you think fires are lame

The unwritten laws of camping state that you must have at least one fire a day. Everyone seems to love fire and I'm sure that watching wood produce glorious orange and red warmth is the closest us muggles will ever get to magic. There are few better joys in life than toasting yourself too close to the fire and relaxing after a long day of adventuring.

Plus, you feel pretty Bear Grylls when you cast aside fire lighters and make a badass fire which cannot be doused by rain or pouring 2 litres of water on it. Just don't go too Bear Grylls and start stealing parachute cord and doing pressups wearing nothing but a coat. That's too far.

I don't know about you, but I am all for saving money. I have only visited a relatively small part of Canada, so I will not speak for all of it, but hotels are not cheap in the parts I've been to. Air BnB is for sure cheaper than hotels, unless you can get a really cheap motel, but why would you want to when you can camp at the edge of a lake for $36 per pitch (that's £21 at the time of writing)?

Prices do vary between campsites (even Parks Canada owned ones) and some of the more luxurious, independently owned sites, such as Bella Pacifica in Tofino, are going to be more expensive than your basic unmanned sites. That said, it will still be cheaper than a hotel. While we were researching, we saw prices range from $12 - 60 CAD per pitch, per night. The most we paid was $36 per night, so above that is going to be some (definitely not all) of the privately owned sites with more amenities.

On a campsite, you're either going to get toilets that resemble your standard public toilets or a shed with a pit toilet (I prefer to call them forest toilets). I have actually grown pretty fond of a forest loo. The first time I experienced one was in Yosemite and I was not prepared for it.

They really aren't as grim as you think (just don't look in) and my common sense says they're probably as clean as a normal toilet. In fact, they could even be cleaner because they don't produce an aerosol as a normal loo does when it flushes. Obviously I do not have the science to prove it, but give me some agar gel and I will.

All the campsites I went to had clean forest toilets and there's something kinda nice about hearing the birds and squirrels in the bathroom.

...you don't want to reset your sleeping pattern

Studies have shown that by camping for just one weekend, the natural light can help reset your circadian rhythm and your sleep pattern. The same study also found that people were going to sleep earlier and then waking up earlier than they would if they were at home.

We definitely experienced this. As anyone who has ever worked in hospitality will know, it is near impossible to have a good sleep pattern but we noticed a difference after just a couple of days of camping. We were going to sleep at about 22:30 (unheard of for us) and waking up between 7 - 8 in the morning. I wish we could keep it up now we're back, but we're already way out of step with the routine we had while camping. 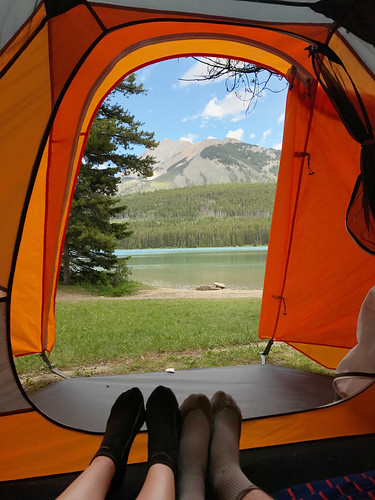 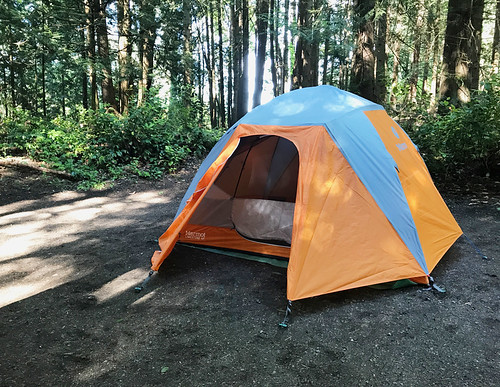 ...you don't want someone else to deal with sorting your stuff for you

If you're flying to Canada, or even driving a very long way, it would be very expensive and a pain to take your own equipment with you. We don't own any camping equipment at all, so we wondered how we were going to do it. Surprisingly, there doesn't seem to be a huge number of camping equipment rental companies, but we found Rent-A-Tent in Canmore. (They also have an office in Vancouver and I believe you can pick up from one office and drop off at another.)

We have used them twice now and they're great. You walk into their offices and they give you everything you need, and at the end of the trip you take it back to them and they sort out cleaning all the mud and pollen off it (oops). As well as giving you equipment, they're campers themselves and can tell you about places to stop, things to do, and have some great links with local tour operators as well. On top of that, they are really friendly guys; Canadian hospitality must surely rival Southern hospitality.

...you can't be bothered to clean up after yourself

This is actually a serious one. On every single campsite (and on most trails and day-use areas) in Canada you will be told and see signs regarding food, food waste and wildlife. All campsites operate the Bare campsite scheme which means you cannot leave anything out which has a food smell; this includes food, food waste, packaging, or even clean dishes or towels. It seems pretty overwhelming to begin with, but you just keep everything in your car or a food locker.

The problem with food smells is that they attract local wildlife, which can be dangerous for them and us because they might end up associating humans with food; they will stop hunting for their own food and will begin to enter campsites looking for food. This is not some kind of scare story either, it happens because of people's ignorance and stupidity.

Last year, we tried to book in at Two Jack Lakeside in Banff but couldn't because the campsite was shut due to a "wolf problem" and they weren't sure when it would reopen. We researched it and discovered that a wolf had been showing "bold behaviour" and entering the campsite frequently, attracted by food left out by campers. Unfortunately, that wolf had to be destroyed because you just can't risk a wolf attacking someone for food. The sad part is that it could have been entirely avoided and it was ignorant humans that cost that wolf it's life.

What's worse is we still saw people ignoring everything they've been told and leaving half-full cups out overnight or rubbish. If you can't be bothered to keep on top of the washing up or keep your campsite bare, don't go camping in Canada.

What do you think, think you would like camping in Canada? 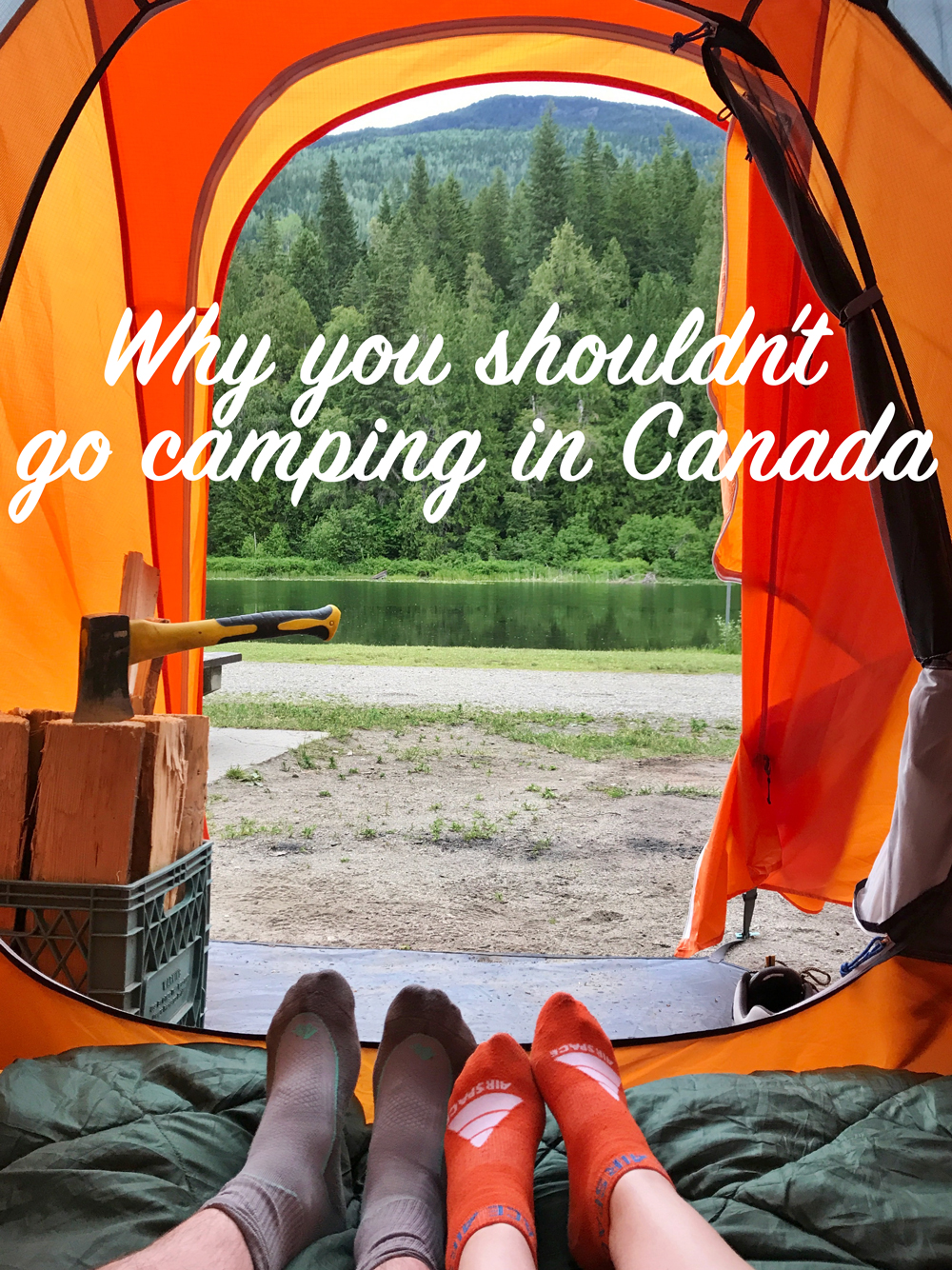