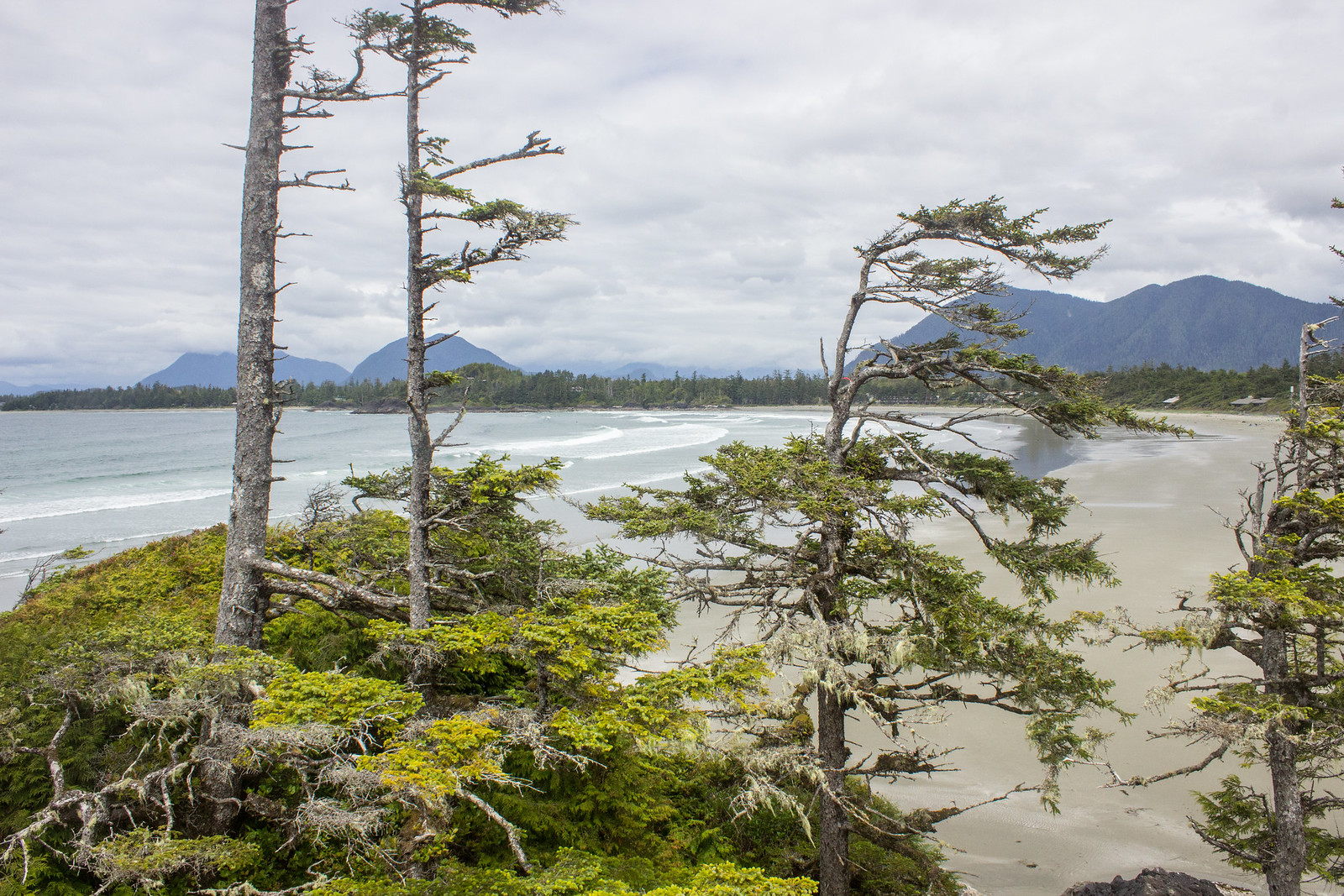 Two days in Tofino is absolutely nowhere near enough to do everything the cosy, windswept little town has to offer. However, I can promise that being in Tofino is like slipping into the comfiest PJs ever and you will emerge three days later feeling so refreshed and relaxed - even if you pack your days full of adventures.

The windswept town is almost half way up the west coast of Vancouver Island, just off the coast of Vancouver. Tofino is almost surrounded by the Pacific ocean, and interestingly is the end of the Trans-Canada Highway. There's plenty to do in this surfers paradise, from watersports, wildlife watching, hiking, eating, and relaxing. 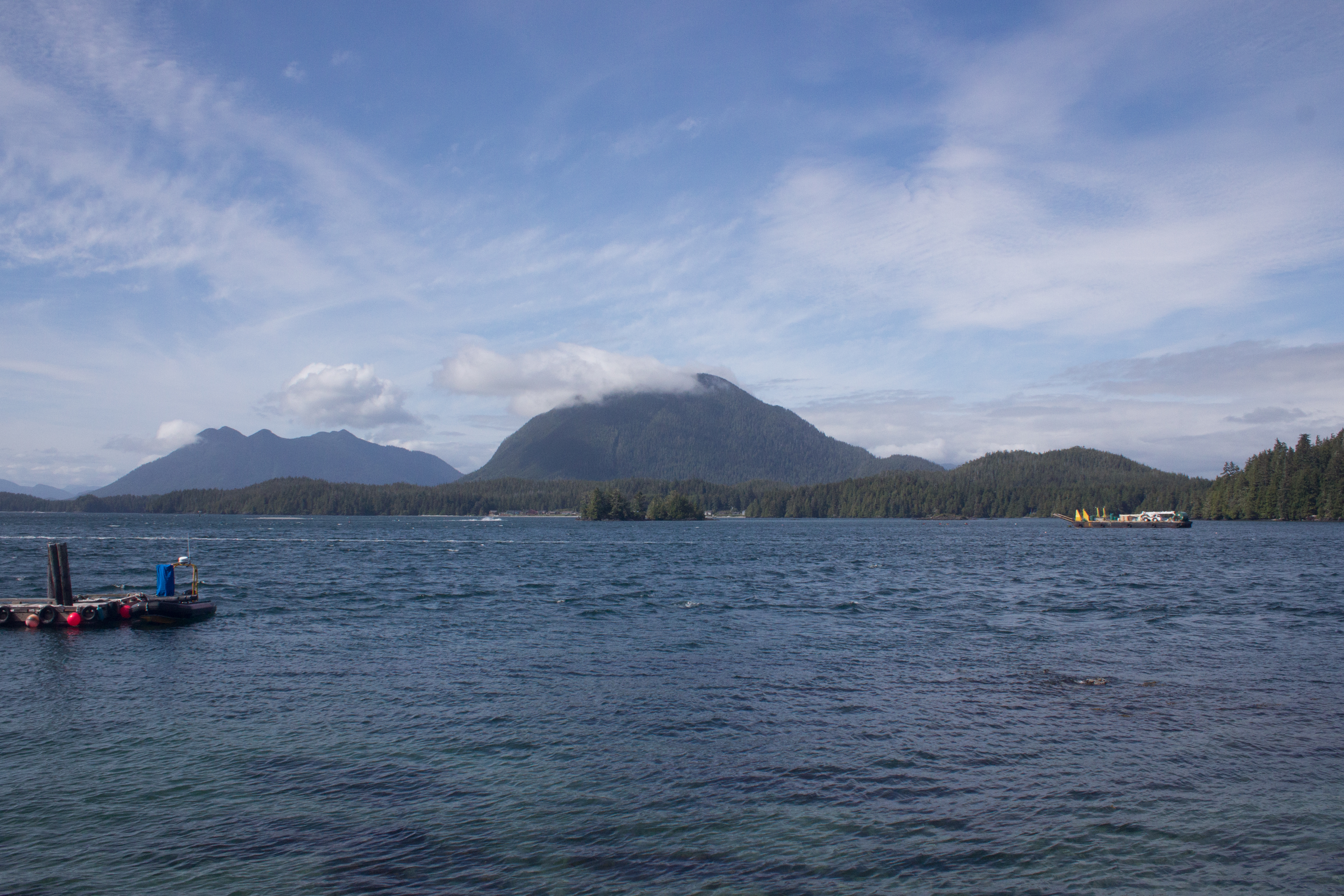 Tofino is a small town on the west side of Vancouver Island at the end of highway 4. With only one road connecting it to the outside world, it feels so peaceful and cosy. If you're looking for a destination that makes you feel a million miles away from chaos and allows you to reconnect with that wild feeling, you need to go to Tofino. In the summer, Tofino attracts hikers, nature lovers, and surfers. In the winter, it attracts storm watchers.

It's no coincidence that the local magazine is called "Tofino Time". Life slows down to half pace as soon as you enter the town. The vibe is more chill than Shaggy & Scooby Doo. The only place people seem to be in a rush to get to the is the beach, with good reason because the surf is good and the views are even better. I'm not kidding, we saw so many people running to the beach with their surfboards under their arms, like they had an insatiable need to surf. We even saw a guy managing to ride a bike and hold his surfboard at the same time - I have no idea how he did it. I suspect that if I tried, it would involve a lot of face-planting the floor.

What to do - how to spend two days in Tofino

Two days isn't much time at all. Don't pack your schedule too tight because you're going to want time to relax and once you start exploring beaches and covers, you'll soon run out of time.

There is no shortage of wildlife to be seen around Tofino, whether it's whales, birds, bears, seals, or something else. I think you would have to have a whole load of bad luck and bad timing on your side if you didn't see anything.

Several companies in Tofino and Ucluelet offer boat or air wildlife tours. We went whale watching with Jamie's Whaling Station and had a great time spotting whales, sea otters, and taking in Clayoquot Sound, and learning about the area. We really enjoyed their tour and would definitely recommend them - next time we want to do their bear watching tour. 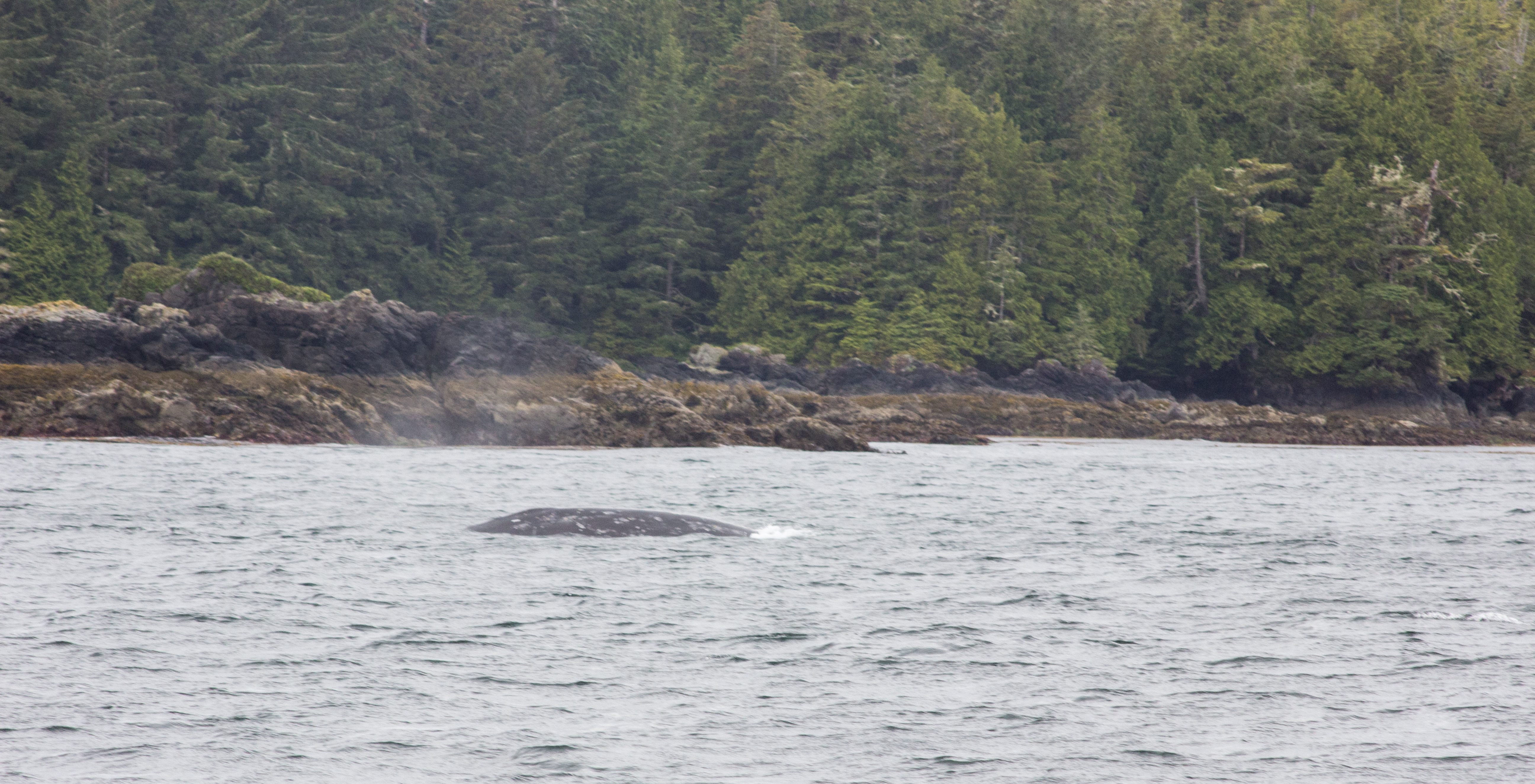 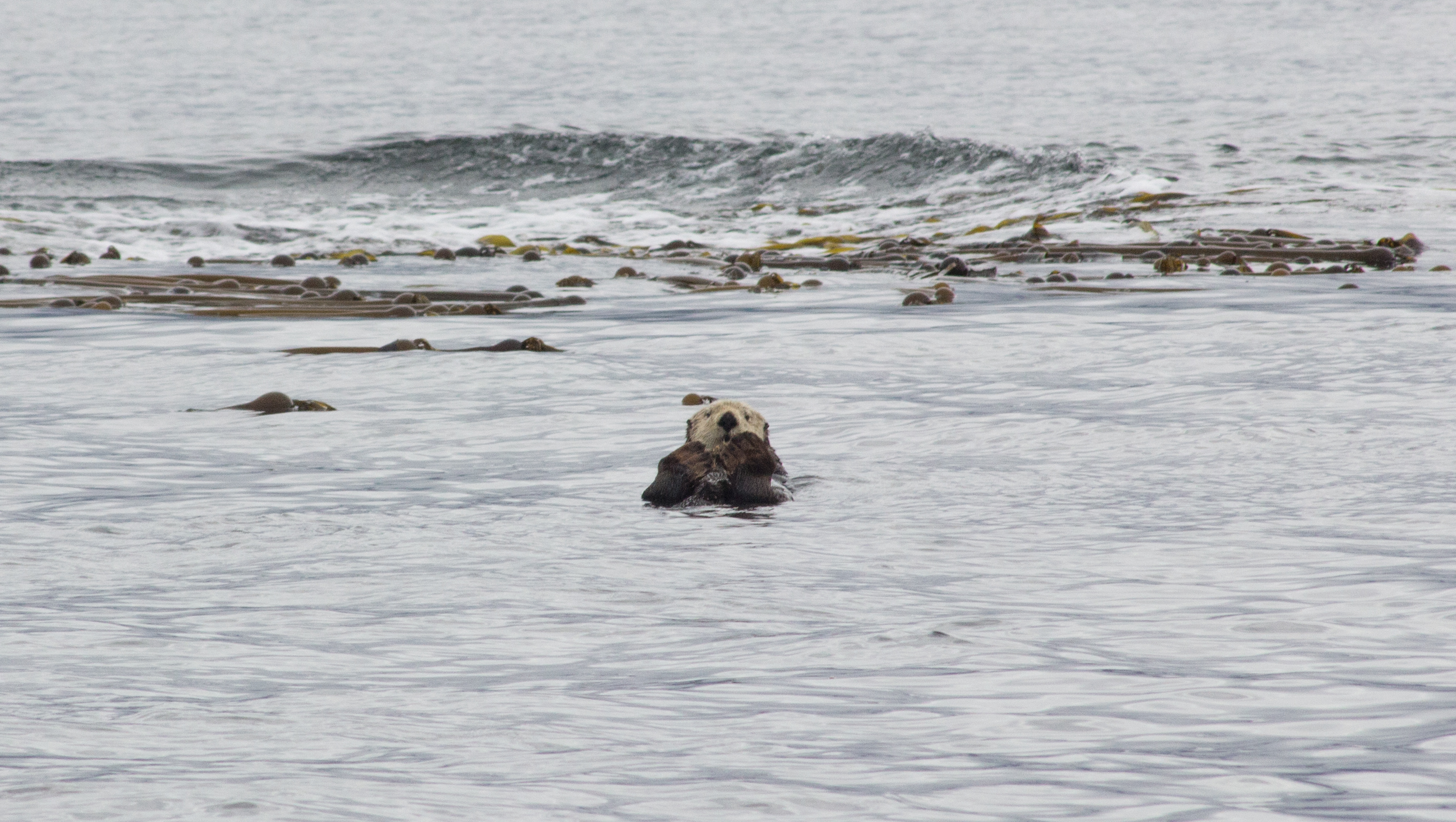 Wildlife spotting on your own

As I said, I think you'd have to be pretty unlucky to not see something. Spent some time on beaches and you might end up seeing something wonderful. We followed the Tonquin Trail from the community centre down to Tonquin beach and spotted whales out in the bay, and saw a bald eagle chilling on a rock.

Pay respect to signs informing you that beaches are closed to humans after dark to allow wildlife to feed. And never forget that you are the stranger in another animal's territory. Make sure you don't leave any litter or food around that may attract wildlife, carry bear spray, and know what to do if you encounter a bear, wolf, or mountain lion.

I recently read a PhD thesis which commented that a big chunk of people surveyed were entering into areas that had bears and they didn't know what to do if they encountered one. (There are no stats as that was an observation she made, not actually part of her research.) 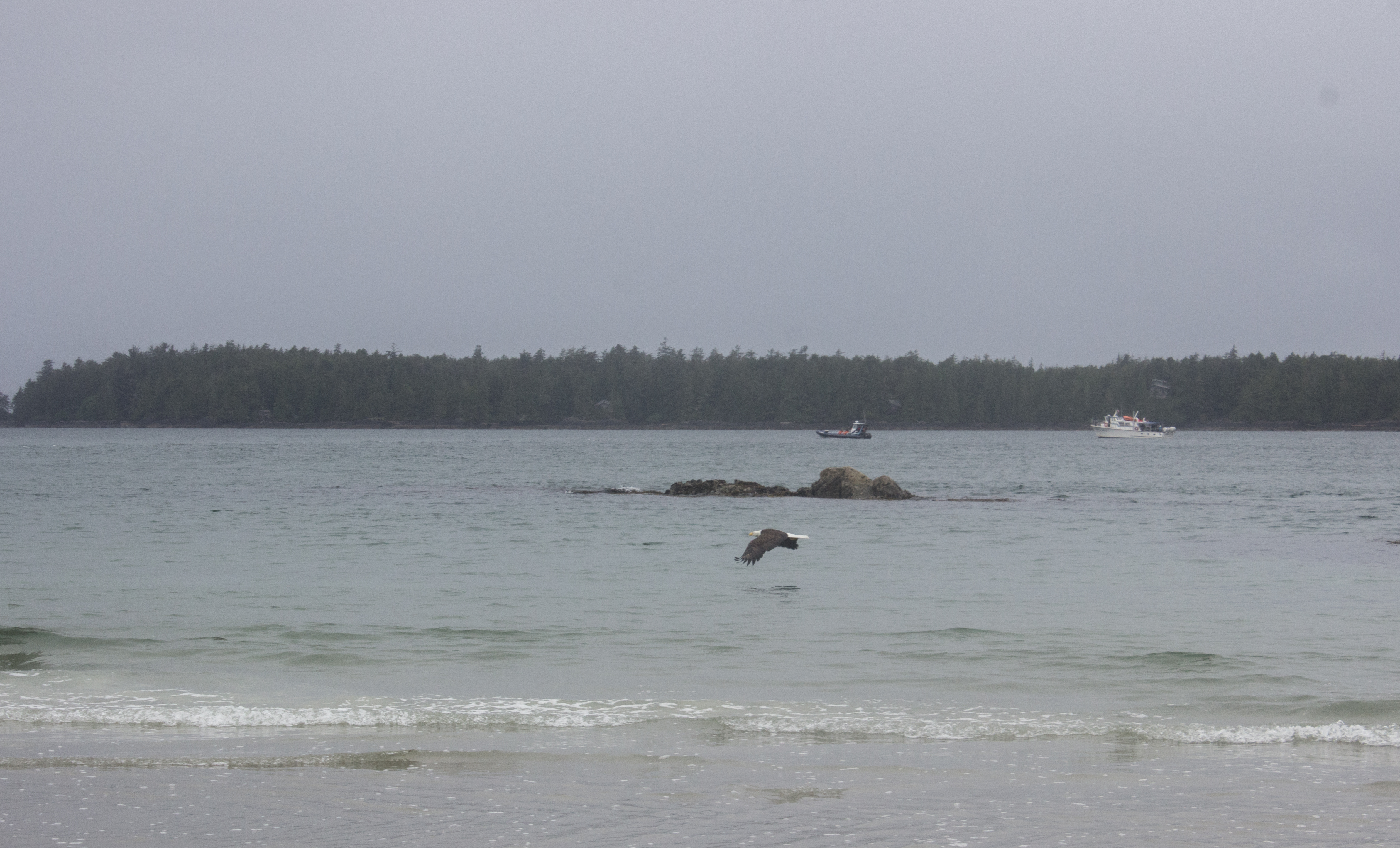 The beaches around Tofino are some of the most beautiful beaches either of us had ever seen. They're vast, windswept, and you can walk between some of them at low tide.

We spent hours exploring beaches, climbing up rocks for views, looking for rock pools and taking in where we were. We even discovered a beach called Rosie Beach, which had a beautiful house perched on the edge of it. It was pretty fun to imagine what it would be like to live there and look out your window to the sea every day. 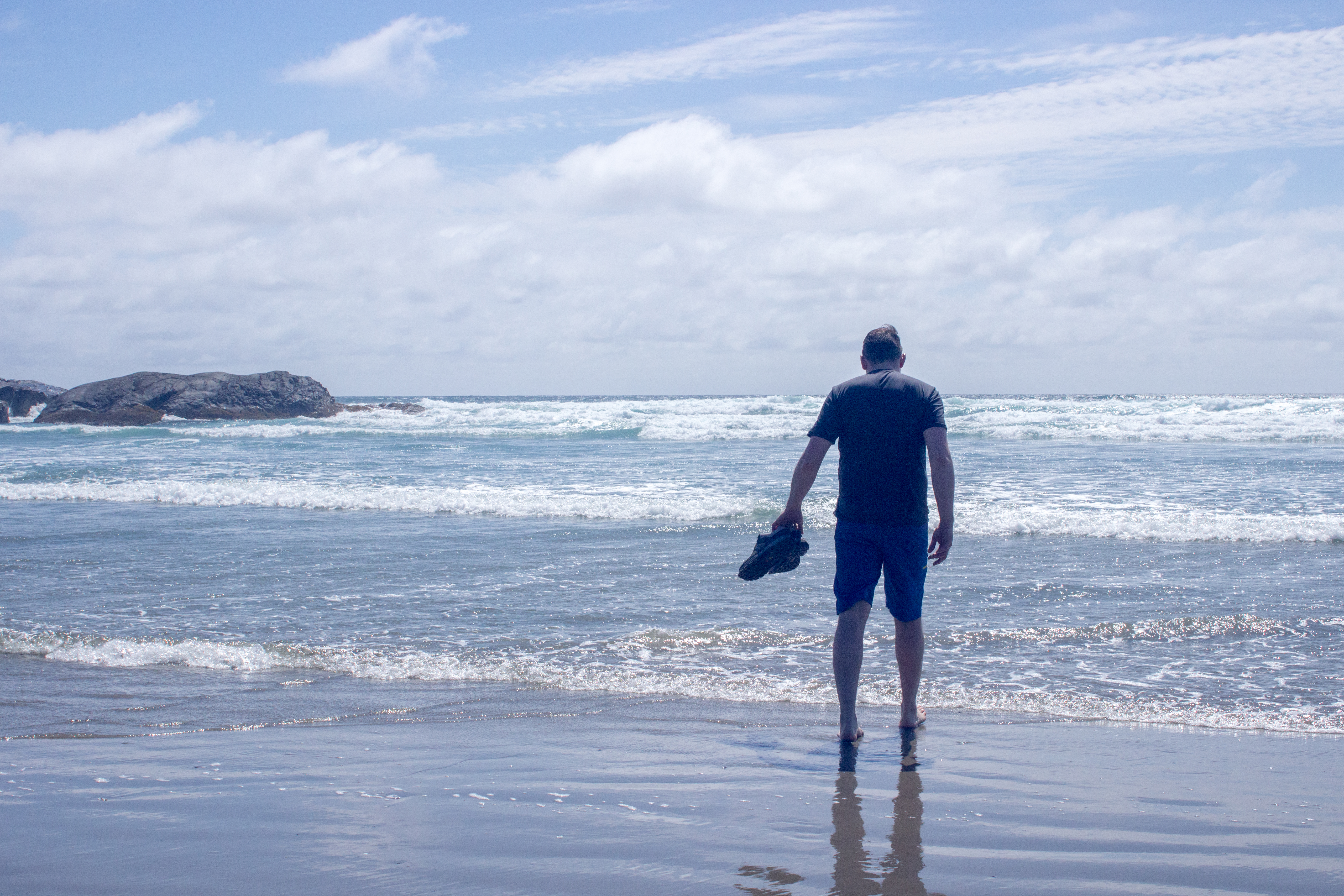 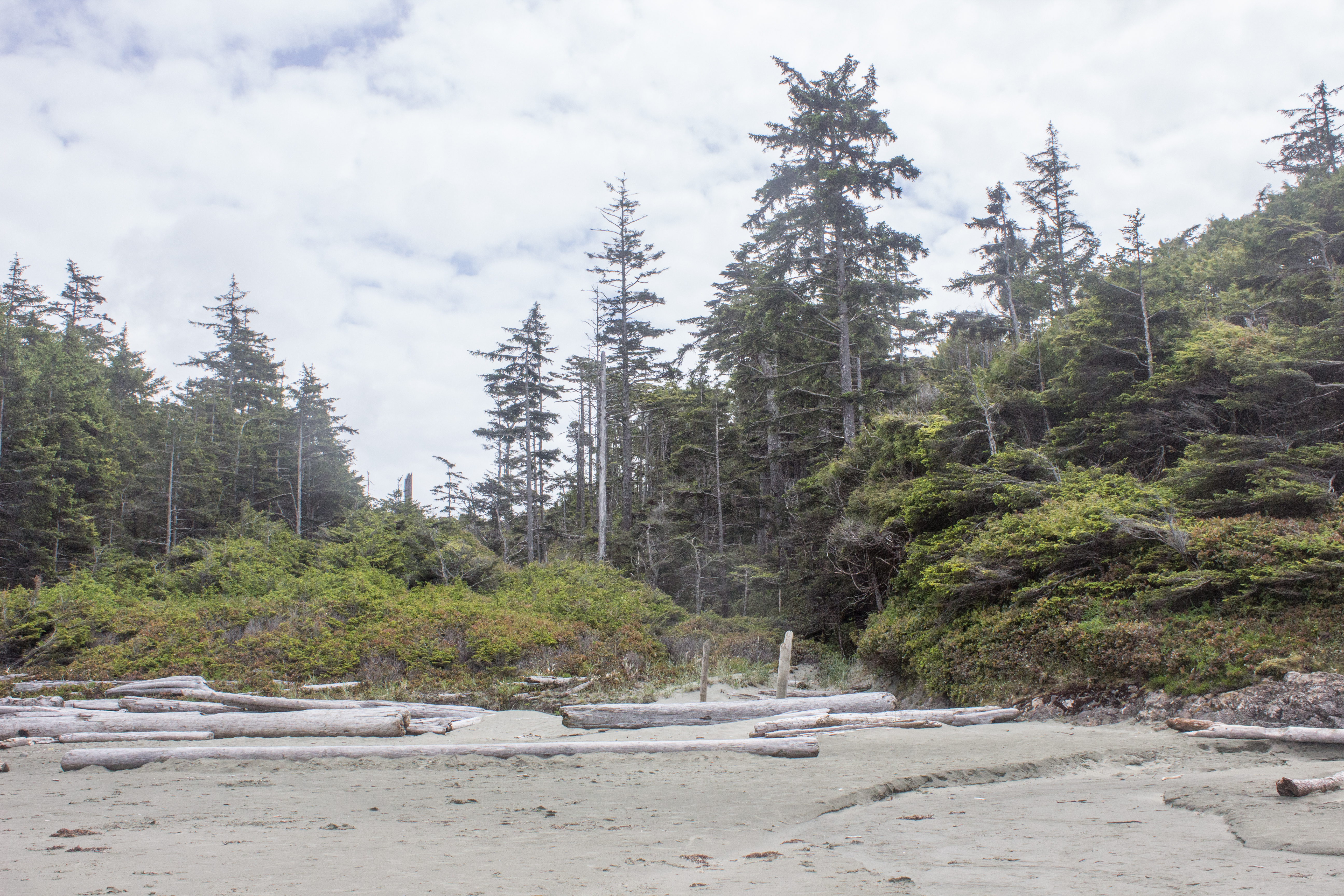 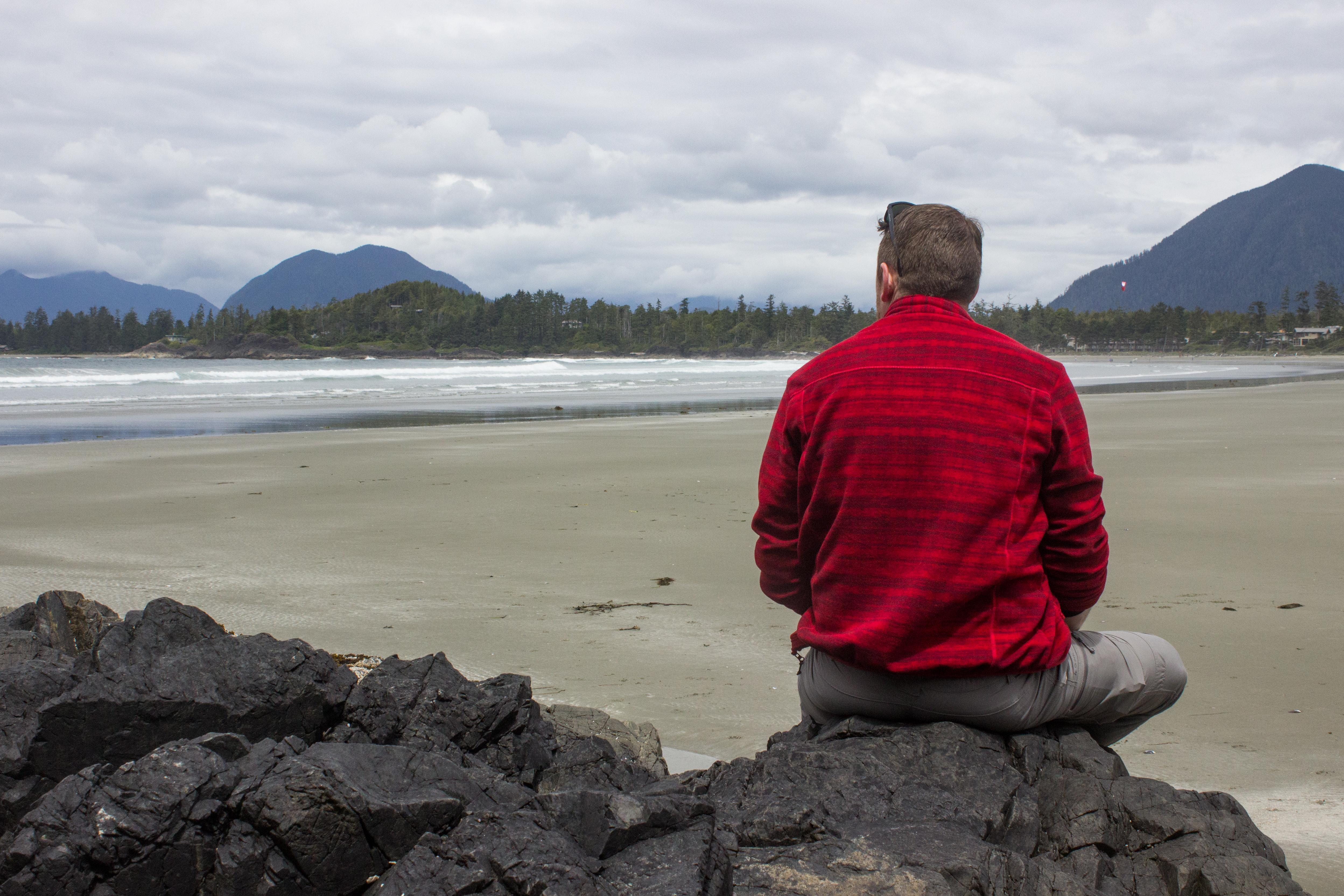 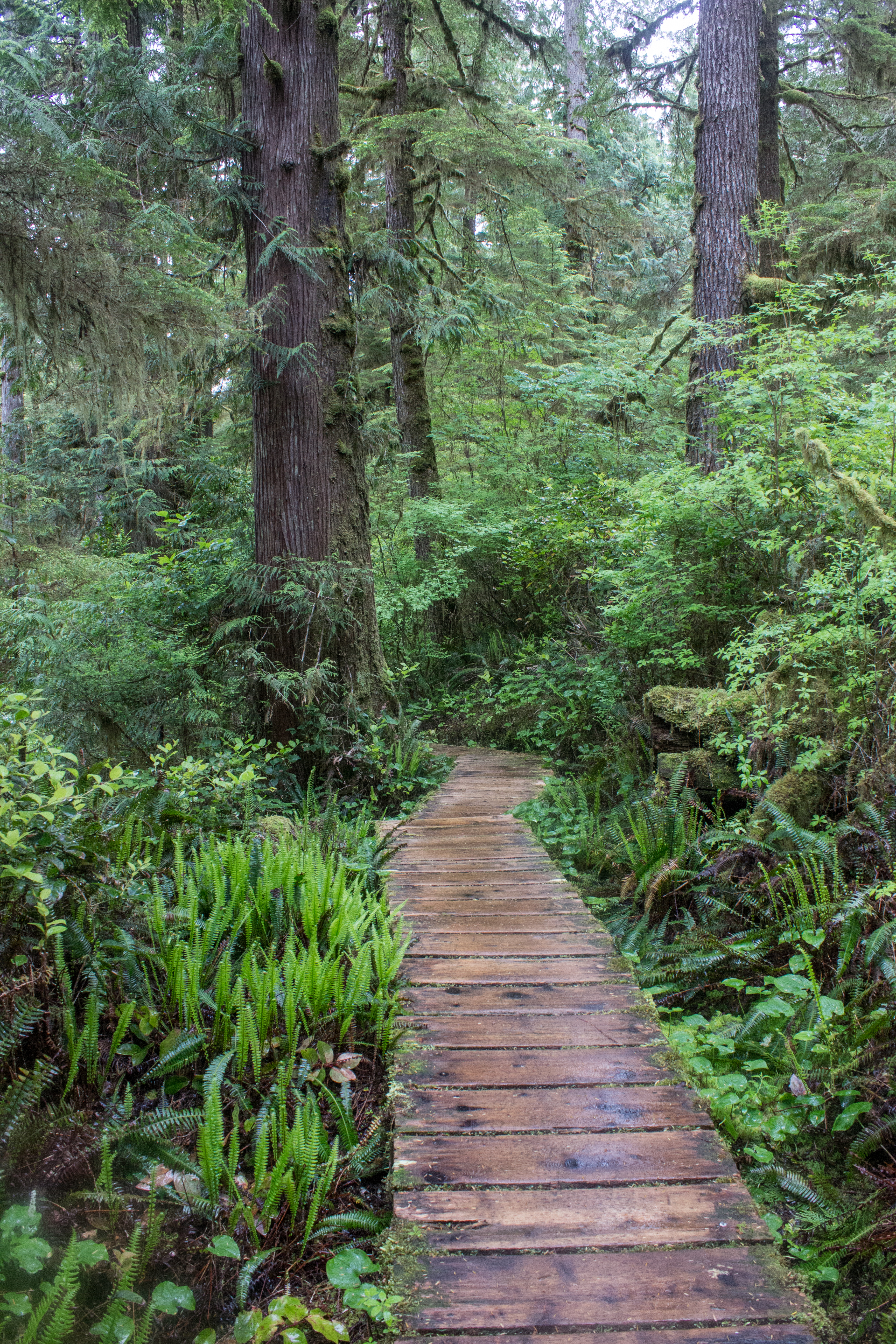 There's no shortage of hiking trails around Tofino. Here are some of the ones we did:

There are many more trails around and we found Tofino Trails to be really helpful when planning what we were going to do. If you fancy going further afield, the Lone Cone trail looks like it provides rewarding views over Clayoquot Sound. As it involves getting a water taxi to Meares Island, doing that hike will probably take up the majority of your day. This hike is definitely on our list of things to do when we return.

Tofino is a surfers paradise. Unfortunately we didn’t have chance to go surfing but we saw loads of people trying it out for the first time, and total pros. You won't struggle to find a company who can teach you to surf or paddleboard, and it's something we want to try out next time. 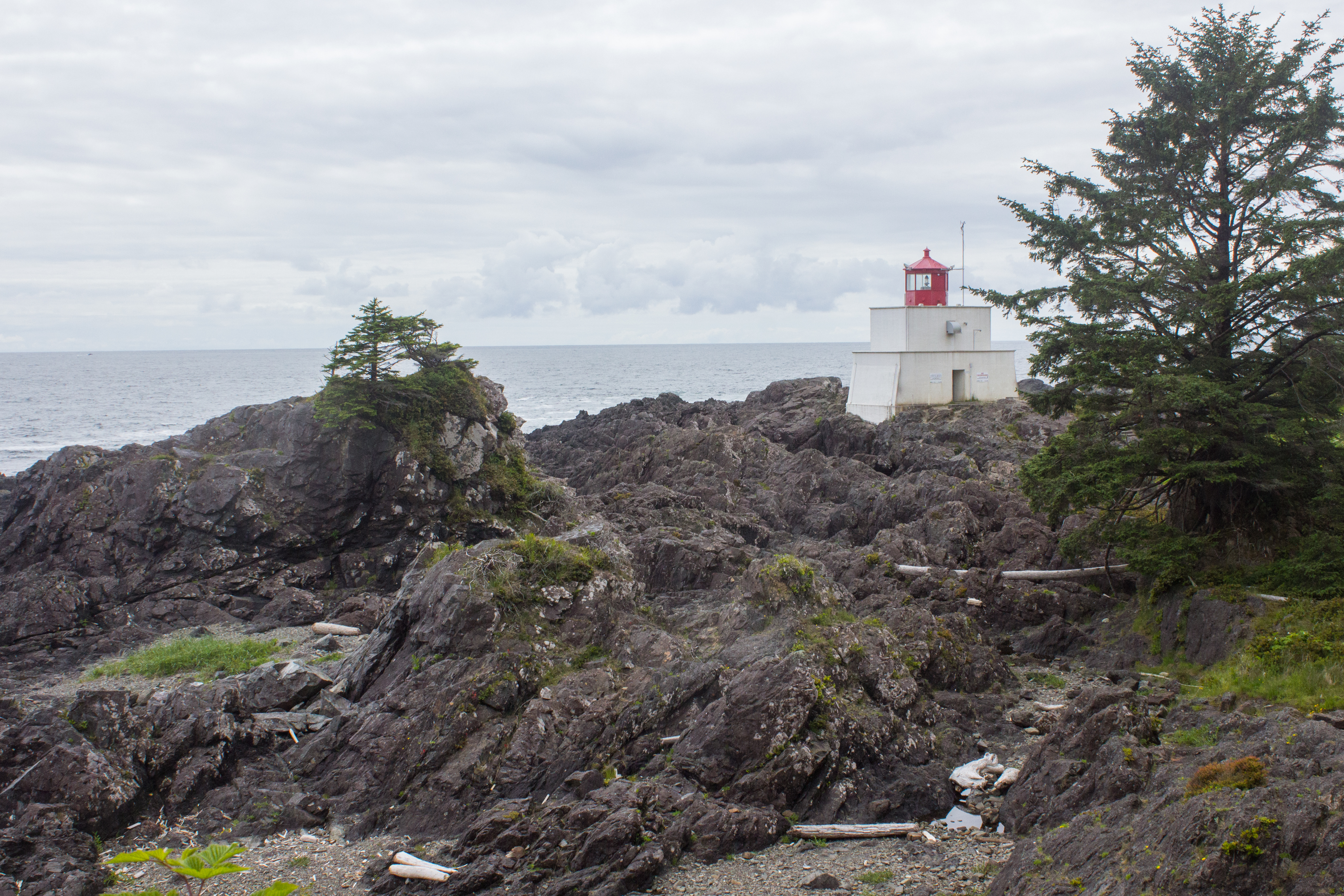 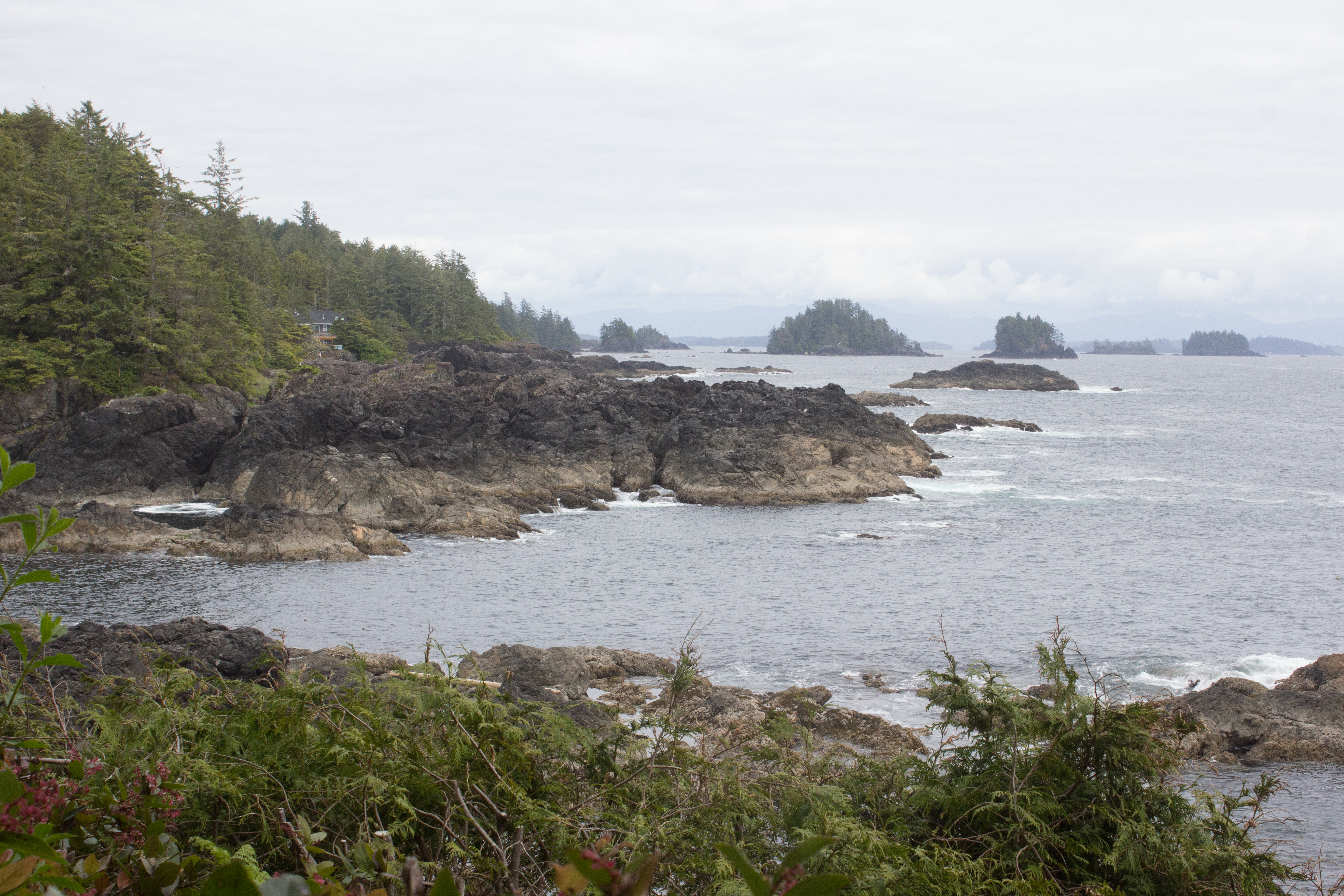 Where to stay in Tofino

Daz and I stayed at Green Point Campground, just outside Tofino, on the edge of Long Beach. It's a Parks Canada owned campsite which can be booked through their website. It cost us $107.90 CAD (around £65) for three nights with a fire permit, and fire wood can be brought on site. All of the Parks Canada campsites we've stayed at were really nice, clean, had good facilities but this one was even more special. Green Point Campground has a private trail down to Long Beach, and it's possible to pick a pitch with ocean views.

There are other campsites around Tofino, which vary in price. For example, at Bella Pacifica you can camp on the beach but it is more expensive than the Parks Canada site.

In Tofino, you can find B&B's, apartments, inns, and lodges. I always recommend AirBnB because  we love it so much. You can always find something that fits your budget and needs. If we aren't camping, AirBnB is our go-to.

There is also an eco-lodge at Tofino's Botanical Garden if you're looking for accommodation that takes care of the environment. That said, we felt a lot of places we visited were eco-friendly and I think that's to do with the close connection the town has with nature and wildlife. 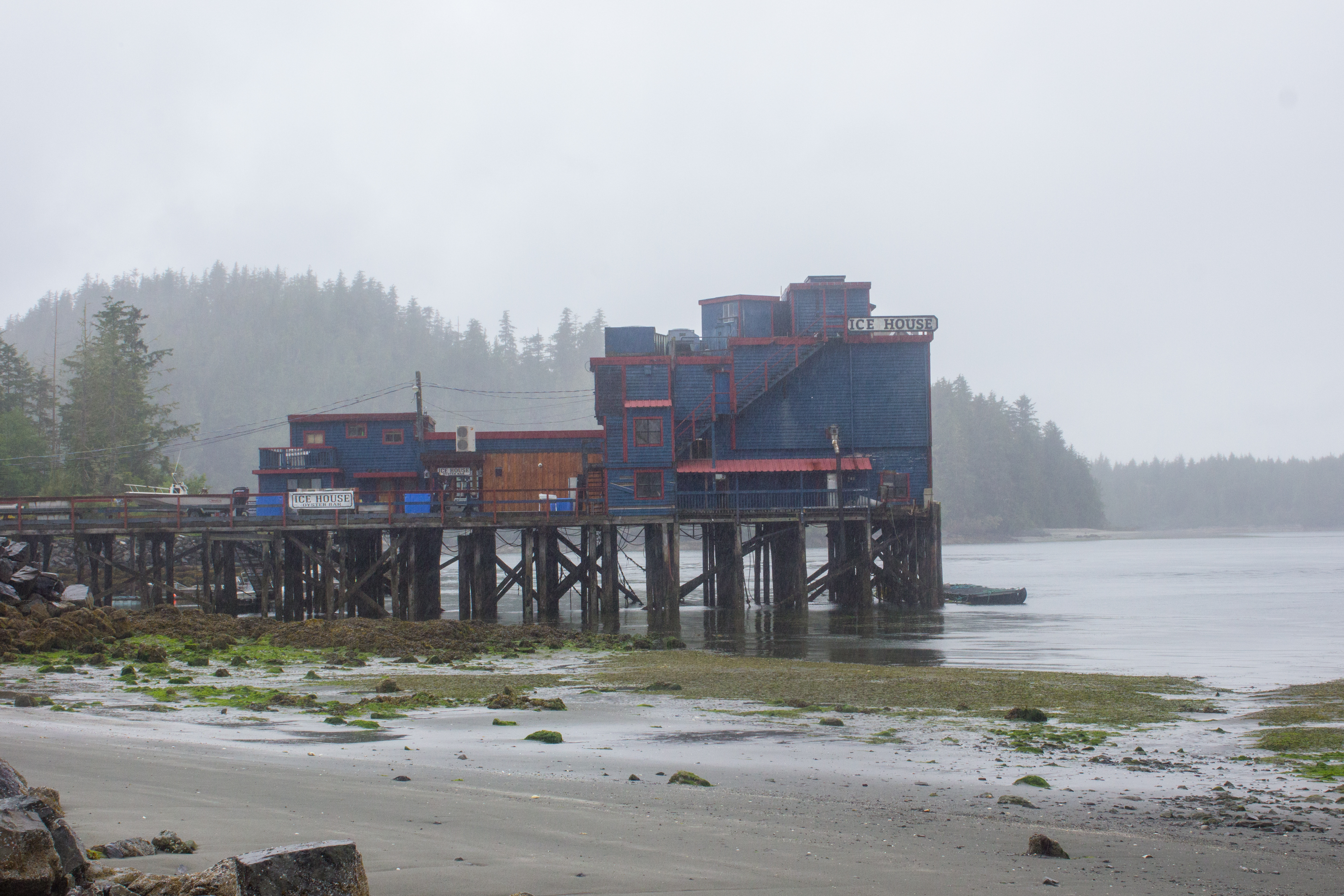 Where to eat in Tofino

Tofino has a brilliant food scene, and you'll have no trouble finding somewhere to eat. We loved the Common Loaf Bakery; it had amazing sandwiches, and we keep thinking about their peasant bread. Sobo is a wonderful little restaurant, with a great story about how it started out as a food truck and grew into a popular restaurant. Wolf In The Fog is a popular restaurant; we didn't eat there but have heard plenty of good reviews and it looks really nice.

Just outside Tofino there's a small group of eateries, including TacoFino, Chocolate Tofino, and Tofitan Cafe. Further down the Pacific Rim Highway is Jamie's Rainforest Inn which does a really nice breakfast. We went there on a rainy morning to relax and plan the rest of our day. 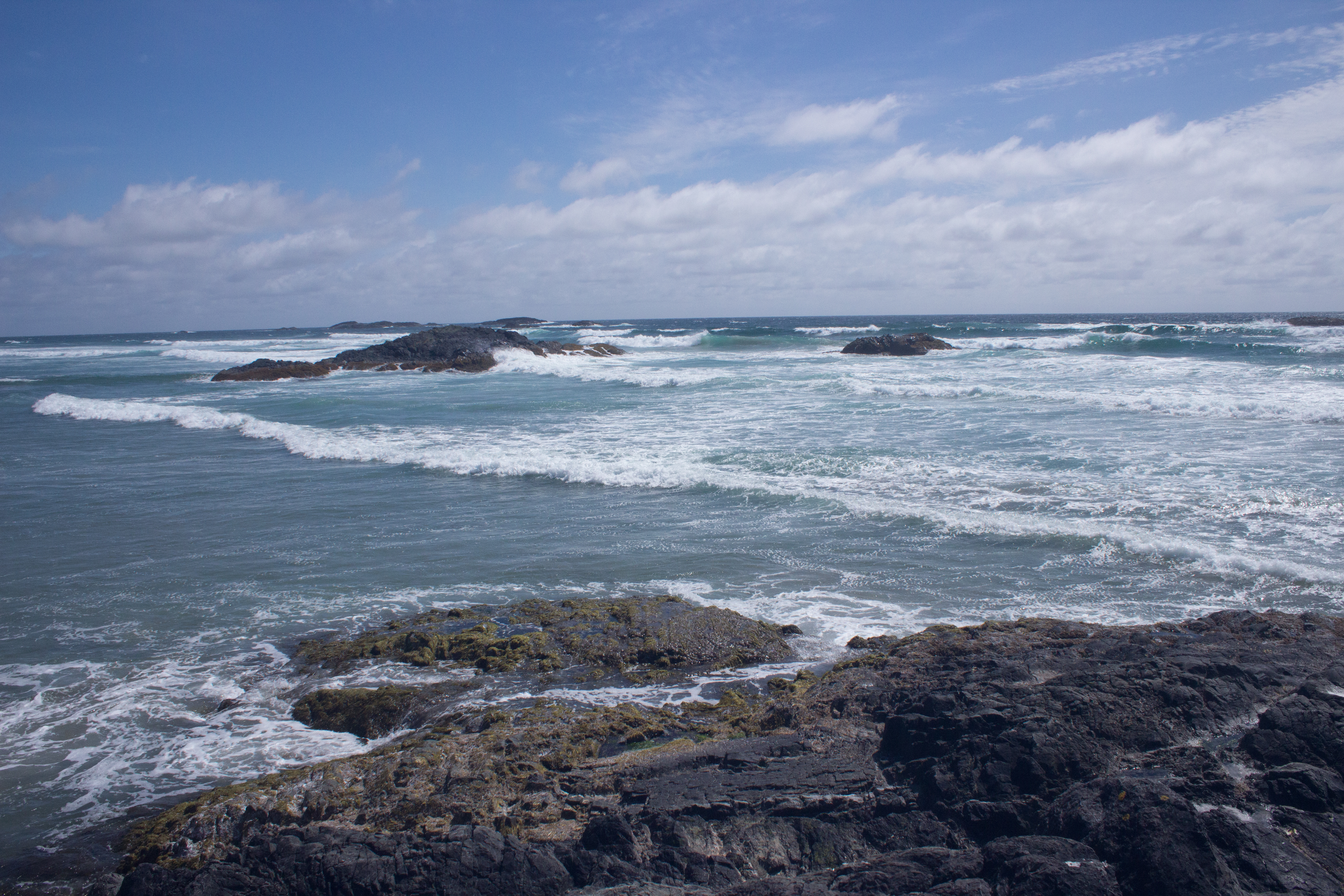 Despite there only being one road in and out of Tofino, it's really easy to get to. The beautiful little town is on the west side of Vancouver Island, which you can get to by ferry, plane, or helicopter.If you're flying, you can fly from Vancouver Intl, Seattle-Tacoma Intl, Victoria Intl, Nanaimo airport, or Comox Valley airport.

From Victoria, Tofino is 317km away via the 1 to Nanaimo, the 19, and then follow the 4 to the end of the road. You'll go through a few towns on the way, so there's places to stop off for fuel, food, and Timmy's! The scenery is wonderful round there, and it's well worth stopping off by the side of a lake for your lunch and to stretch your legs.

The 4 is the only route in and out of Tofino, so I recommend keeping an eye on the road and road conditions on the Driving BC website. A few hours after we left Tofino, we heard that an accident had shut the 4 for a few hours. If there's going to be heavy rain, I recommend leaving extra time to get in or out of Tofino because the roads can feel very daunting in heavy rain and you won't be doing the speed limit. 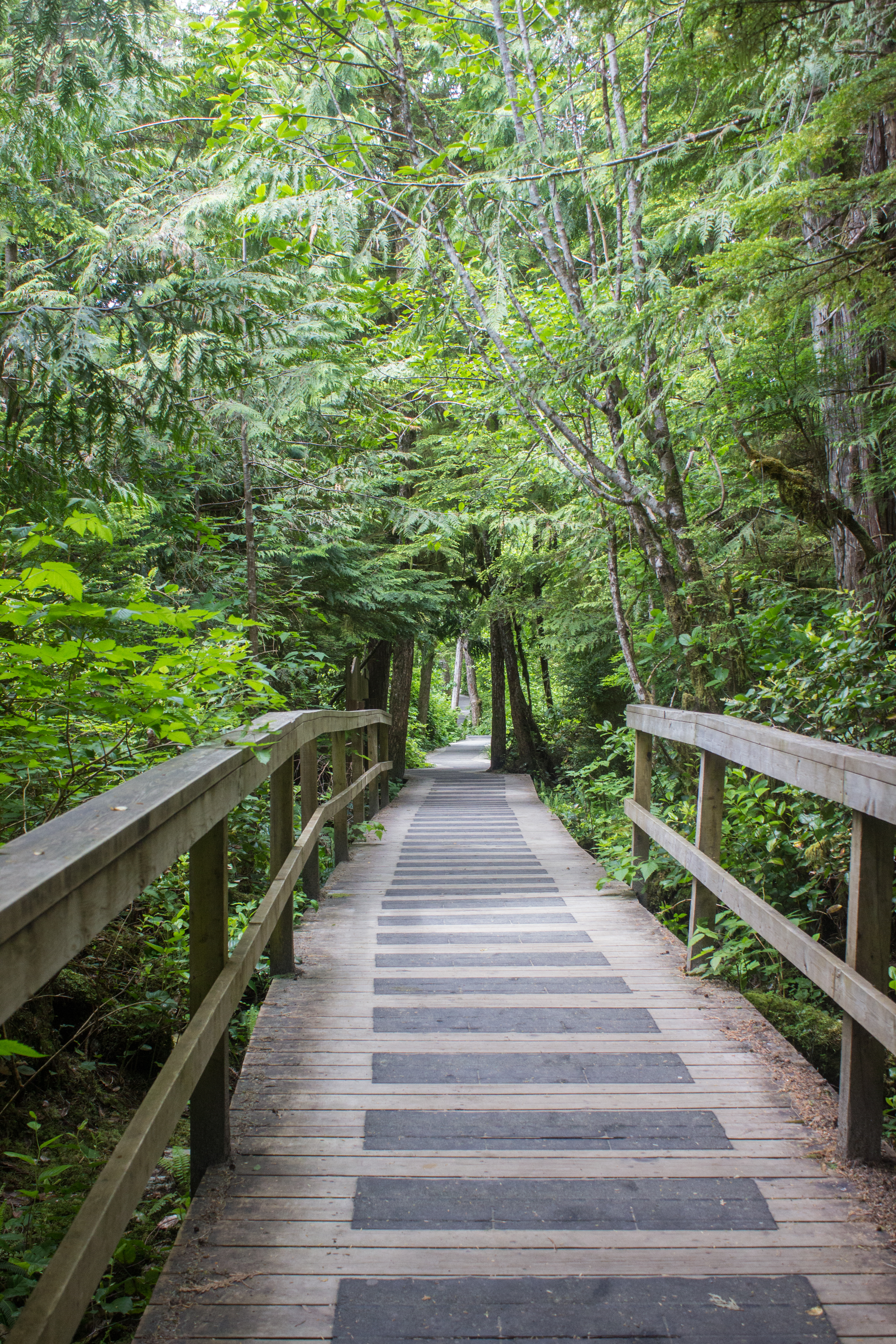 We enjoyed our two days in Tofino even more than we imagined we would. It's hard to explain exactly how relaxed and refreshed we felt after two packed days. After our time in Tofino, we drove across to spend a few days in Vancouver. I've gotta tell you, Vancouver was a stark contrast between Tofino and it definitely took us a minute to adjust to a big city.

Have you ever been to Tofino? If you have any questions, drop me a comment or get in touch 🙂 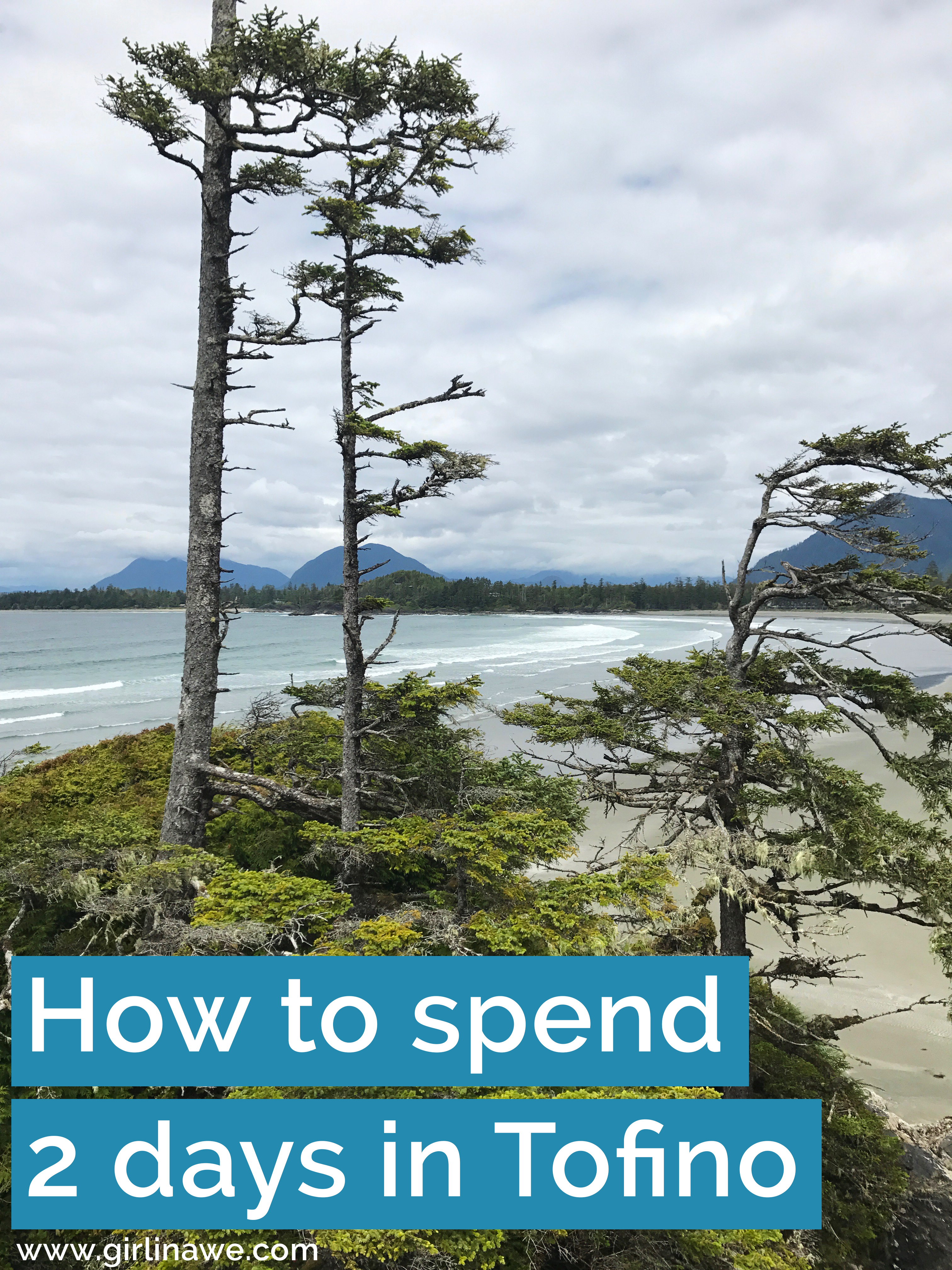