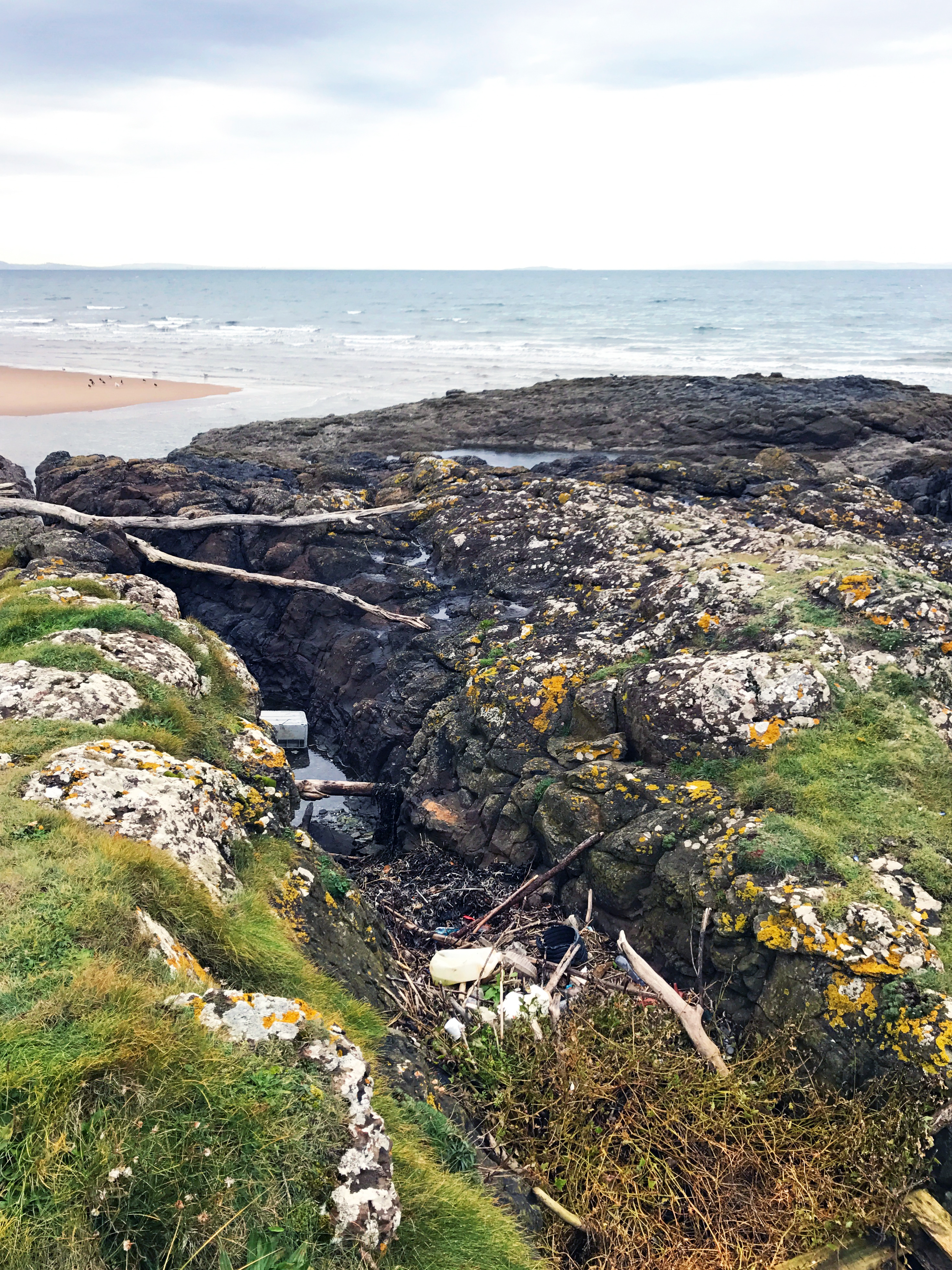 I bang on about my frustration with plastic all the time. It’s great but it’s also absolutely awful, so today let’s talk about why plastic is so bad.

Look around right now. How many items can you spot that contain plastic? It’s an incredibly versatile material, which is precisely how it found it’s way into our homes and lives. There are things I love that are made from plastic; my record player and records being one big thing, the cases video games come in, the Playstation itself, my camera, the keys I’m typing on right now.

Side note: read Blood & Earth by Kevin Bales to discover other reasons why technology can be bad for the environment and people.

Approximately 50% of plastics are made into a single-use item. What?

Single-use plastic is my biggest plastic-based frustration (it’s always fun to rate and categorise your frustrations). I’m sure Daz is beginning to dread going to the supermarket with me because it always involves a lot of “this doesn’t need to be wrapped in plastic!” “Why is this non-recyclable plastic?!” “I’m writing Tesco an angry email when I get home.” Side note; I did and their response about their use of non-recyclable packaging was disappointing. They’re “working hard to make sure even more of our packaging is recyclable.”

There are few things we honestly need to use once and throw away. In fact, now that I’m trying to think about something that truly needs to be single-use, I can’t think of anything. Maybe something surgical? There is sterilising equipment, though, so? If you think of anything, I want to hear about it.

I’m not sure how we ended up putting our convenience over the well-being of ourselves, wildlife, and the planet. But it happened, and we can stop it. We don’t need single-use plastic bags. We don’t need single-use straws; if you want a straw, get a reusable glass, bamboo, or stainless steel one. We don’t need food to come in plastic containers which are non-recyclable. We very rarely need water in plastic bottles. Sure, sometimes you forget your travel bottle but we certainly don’t need to be consuming it in the quantities that we are. In 2015, Americans brought over 88 billion half-litre bottles of water. In a year. And that’s one country.

The problem with single-use plastic is that 1) it’s resource intensive to manufacture (we’ll talk about that in a minute) and 2) it’s very polluting.

Have you heard about the Great Pacific Garbage Patch? I know, you probably wish you hadn’t. This is where some of our rubbish ends up, and sadly it isn’t the only garbage patch. I recently heard about a really interesting campaign between LAD Bible (yes, that LAD Bible) and Plastic Oceans Foundation. Their theory was that if they can get the Great Pacific Garbage Patch to be accepted by the UN as a country (called Trash Isles) then something will have to be done about the pollution. It’s unlikely to be accepted as a country but a brilliant way to get people talking about the issue of plastic pollution.

It doesn’t end with plastic floating around our oceans. It’s washing up on beautiful beaches and uninhabited islands. It’s affecting and killing marine animals in awful ways. Turtles inhale straws. They’re trapped, entangled, or choked by it. They eat it because they think it’s food and it blocks their digestive systems and kills them.

Sadly, that isn’t the end of the plastic pollution story either. Just when we thought we’d got rid of it, it comes back to haunt us like yet another Fast & Furious movie. If we eat animals that have consumed microplastics, we’re also eating plastic. As we discussed in my blog post about plastic in our drinking water, plastic doesn’t fully break down and ends up in our tap water. Even if you don’t eat seafood, you’re consuming plastic straight out the tap.

Synthetic plastics can be made from fossil fuels, such as oil, coal, or natural gas. 4% of the world’s oil and gas is used as feedstock for plastic, and an extra 3 – 4% is needed to produce the energy to make it into plastic.

As well as using up to 8% of the world’s oil and gas, the extraction of these resources can be incredibly damaging to the environment. Most people remember the BP Deepwater Horizon oil spill in 2010. And, maybe one or two big oil spills make the news every year but that doesn’t mean they’re the only oil spills. They’re going on all the time, all over the world; we just don’t hear about all of them. They’re incredibly damaging to the environment and the effects are long-lasting.

As well as taking up non-renewable resources, plastic requires a lot of water to make. It takes 24 gallons of water to make one pound of plastic. Yes, there are other materials which require much more water to produce. Shouldn’t we be doing our best to reduce the amount of water we’re wasting wherever we can by skipping plastic as much as possible?

One of the reasons plastic is so bad is because it does not degrade. Plastic breaks down into smaller and smaller pieces of itself, so it never really goes away. As evidenced by it ending up in 83% of the world’s tap water, delicious.

There is no straightforward answer to “how long does it take plastic to fully decompose?” Estimates range from 10 – 1000s of years, depending on what it is. But some scientists fear plastic never fully degrades, it just keeps breaking down into smaller pieces of itself. Maybe a plastic bag appears to have degraded after 10s of years but it doesn’t mean it’s actually gone. It will have broken down into microplastics (plastic smaller than 5mm) and could end up anywhere.

It doesn’t all get recycled

Ok, so perhaps you’re having similar thoughts to me a couple of years back right now; “if I’m separating my rubbish and recycling so much plastic, why is it causing such a big pollution problem?” That makes sense, right? We’re constantly told to recycle plastic so why is plastic pollution such a big deal?

When plastic actually does get recycled it can end up being shipped all over the world before becoming something new. That’s hardly a surprise given that I could sit here in my dressing gown right now and order something from the other side of the world in the click of a few buttons. In a week or two, I’ll end up missing the postie and have to collect it from the sweltering post office. That parcel will have travelled thousands of miles to reach me and I won’t bat an eyelid at that. If we’re being very pernickety, we’d say it’s not great that it gets shipped everywhere; adding more carbon dioxide to the planet. On the other hand, it’s great that it can be recycled.

Chemicals that damage our health

I don’t know what the solution is. Plastic is so versatile and heavily ingrained in our lifestyles; it’s hard to imagine a world without it. We don’t have to know what the end solution is to make a difference, though. We can begin by quitting single-use plastic, reducing our plastic consumption as much as possible, recycling plastic and hoping it is actually being recycled, supporting companies that use recycled plastic packaging, and using alternative materials.

Be careful with biodegradable plastics because it’s not as simple as you think. It’s easy to think all you need to do is throw it away and it will biodegrade by itself. Unfortunately, that’s not the case. Certain conditions are needed for biodegradable plastic to degrade, and those conditions don’t exist in landfill sites. If they do, the plastic will end up releasing methane, which isn’t great for the environment either.

I am pretty cynical in that I don’t expect my current government to live up to my expectations of what they should be doing in regards to the environment. (Hey, they don’t live up to our expectations for the NHS so…) While I believe it’s equally up to you and me, the private sector, and our governments to make a change, I think the public have to force it in countries where the environment isn’t a priority.

What does that mean? It sounds like a lot of legwork, right? Maybe it is. And let’s be honest, we’re all so busy that we need things to be made easier for us. So, that’s where I can help. Below, I’ve got a list of a few plastic-free alternatives and some blogs I’ve found really helpful for reducing my plastic consumption.

You don’t have to make all these changes overnight. Do whatever works best for you and your life; small changes are better than no changes.

When I first decided to reduce my plastic consumption I felt overwhelmed. So many things contain plastic, how do I start to replace those things? And what should I start with? I don’t suggest throwing everything plastic out at once; start slowly and replace things when they break.

The links below are either things I’ve used and recommend, or things I am looking to buy when I replace something.

If you want to read up some more, here are a few things I found really interesting while researching this blog post & things I’ve read recently

Climate change: being imperfect doesn’t mean you don’t have a valid opinion

Trying out Antipodes – are their products worth the hype?

How to recycle properly